Early 80s aidoru pop, or Kayo Kyoku in general, sipped a lot from the mid-to-late 70s disco sound that, after 1980, went downhill in popularity in the United States.

“Melancholy Festa”, for example, is essentially a disco song, but embedded in tragedy. In other words, the arrangement is safe disco in its purest form, but we're talking about Akina Nakamori (中森明菜) here, so the overall sound is still drenched in a painful sadness.

As part of an inside joke I usually do with a fellow friend, which is also an avid J-Pop fan and listener, this song would be perfect if played in what we affectionatelly call Akina's cabaret: a decadent basement full of liquour smell and cigarette smoke where Akina would perfectly shine as the true dramatic and sensual diva in front of a questionable audience.

In this case, though, since she was still a very young lady at the time, her tone, although already distinct enough if compared to the usual aidoru affair, was far from the deep, powerful and vibrato driven voice we would get used to from 1986 onwards.

“Melancholy Festa” was included in the album “ANNIVERSARY”, which was released in May 1984 and reached #1 on the Oricon charts, selling 476,000 copies. Lyrics were written by Etsuko Kisugi (来生えつこ), while music was composed by Juichi Sase (佐瀬寿一). As for the arrangement, Mitsuo Hagita (萩田光雄) was the responsible. 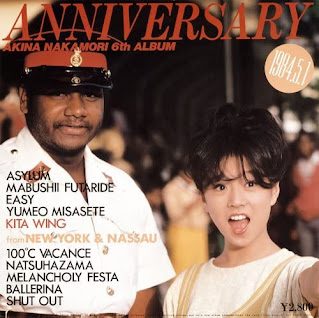