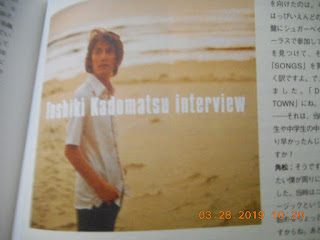 Yup, I know that I put up a Toshiki Kadomatsu（角松敏生）article back on September 6th but I want to use this opportunity to inform all of you that a couple of people that I consider to be my friends and fellow City Pop enthusiasts and experts, Rocket Brown of "Come Along Radio" and Van Paugam of "Mayonaka Hour", got together the other day to exchange their thoughts on the genre through the latter's frequent podcast. There was also the theme of the works of Kadomatsu himself so if you're so inclined, why don't you have a listen to "EPISODE V: THE SOUL OF CITY POP"?

During the podcast, Rocket and Van were talking about the proper title to place upon Kadomatsu. Would he be the King of City Pop or the Prince of City Pop? I don't quite know, but perhaps I can add some of my own titles such as the Viscount of Vaporwave, the First Elder of Future Funk and the Master of Metropolitan Music.

Moving along, why don't we also partake in a bit of TK ourselves since it is City Pop Friday and the summer is gradually and inevitably closing up shop for another year. Here is "Summer Emotions" with words and music by the man himself, and it comes from his May 1984 compilation album "SUMMER TIME ROMANCE〜FROM KIKI". Just like that gorgeous photo on the album cover, there is something nicely sunset and calming about the track with the post-disco strings and the sax solo. It's too bad that it's so short at under three minutes, though; I would have thought that it would suffice as the final song for the album rather than Track 2, but there's no doubting the relaxation gotten from it.