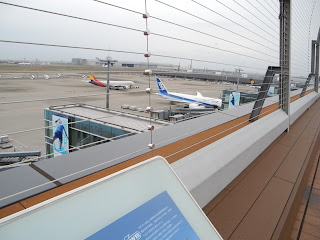 Although I've cherished visiting my old friends and students in Tokyo in the previous decade, flying isn't one of my favourite activities. I got airsick the very first time I flew on a Canadian Pacific flight to Japan which manifested itself belatedly in a taxi going away from Haneda Airport (late bloomer, I am), and then a particularly lousy flight through a typhoon many years later pretty much put the kibosh on any appreciation of Economy class. For me, flying is for the birds, and you can take that in any way you like.

Still, I gather that in decades past, there was a romance and luxury about flying the great blue skies, and the occupation of flight attendant was a much envied and desired one. That's the impression that I get from The Birds'（ザ・バーズ）singing of the theme song for the 1970 TBS early evening half-hour drama "Attention Please". With that sound of a jetliner taking off, everyone else is taking off for an optimistic and cheerful adventure against the backdrop of a happy kayo melody from that time period with the strings and horns.

Prolific lyricist Tokiko Iwatani（岩谷時子）and composer/arranger Go Misawa（三沢郷）were responsible for the theme song. As for The Birds, although the name sounds like it belongs to a Group Sounds band, it actually represents twin sisters, Junko and Reiko Toyoda（豊田順子・豊田礼子）from Saitama Prefecture who debuted in 1968 and released some singles up to the middle of 1971.

From what I've read of the synopsis for the show, it reminds me of how America's "The Love Boat" did their shows with various famous guest stars coming in each week. Unfortunately, I couldn't find any footage of the original show, but in 2006, there was a reboot of "Attention Please" starring Aya Ueto（上戸彩）under an hour-long format.