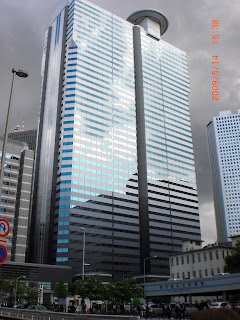 Mighty shiny building in West Shinjuku. I hope those window cleaners got a hefty bonus for their work. Not sure whether I actually set foot in there, but there was one of those towers that I did get to enter to have dinner right at the top. Wonderful view...in fact, it was so wonderful that I've completely forgotten what I ate there. If you know my appetite, that's not easy to do.

"Shiny Lady" is the first track on singer/musician Hiroshi Sato's（佐藤博）compilation album "This Boy" from May 1985. Sato of course composed and arranged this bouncy and funky City Pop tune that, for the lack of a better word, is a typically Sato-esque creation. The man is a marvel on the keyboards which include a Yamaha DX-7, a Mini Moog and a Fairlight CMI according to the J-Wiki article on the album, and the whole effect is like a walk among the modern skyscrapers of the aforementioned West Shinjuku, day or night. Yui Masaki（真沙木唯）is behind the lyrics that Sato and his backup, EVE and Miho Fujii（藤井美保）, sing out high and low.

Now that I've been listening to City Pop with all of its members including Sato, Tatsuro Yamashita（山下達郎）and Makoto Matsushita（松下誠）among others, I've gotten some pretty solid images whenever I hear their music. With Tats, it'll either be a beach or an Eizin Suzuki painting, but with Sato, it'll be photos of gleaming Tokyo buildings.