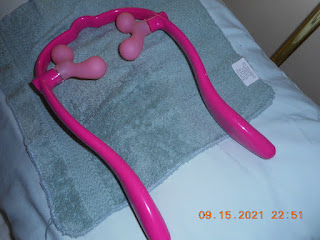 Well, as they say, good things come to an end, and fans of "Kobayashi-san Chi no Maid Dragon"（小林さんちのメイドラゴン...Miss Kobayashi's Dragon Maid） will probably be going into major withdrawal early next week when the final episode of Season 2 gets shown. We've seen some more plot and character development and things such as the addition of at least a couple of more regular characters, Kobayashi gaining a new body part temporarily, Tohru and Elma perhaps finally making amends, and Kanna vs The Mafia.

The penultimate episode which I caught a couple of days ago was fairly dramatic as I'd expected but early on, I did find out that Kobayashi was on an eternal search for the perfect massaging device due to her chronic lower back issues. Crazily enough, one of those devices popped up immediately in the above video, and it turned out to be the one that I got from Tokyu Hands back in 2014. And just like Kobayashi, I haven't used it much either. For one thing, it's ouch-y! Fortunately for one of us, though, there was a vibrating dragon tail that finally did the trick.

Anyways, I did say that good things do come to an end, didn't I? So perhaps this song here will probably be the last entry for the "Kobayashi-san" file for the next little while (hopefully, we won't have to wait another four years plus for Season 3). Not certain whether this will remain just that one-minute musical interlude or whether it will get the full three to four minute treatment, but the supremely upbeat song finished off Episode 3 of this season as the ending theme.

The song is titled "Ishukan Relationship" (Interspecies Relationship) as a slight nod of the head to the regular ending theme for Season 1, "Ishukan Communication"(イシュカン・コミュニケーション). Tohru was digging her horns of a dilemma into what could be a good hobby for her. Finally, she opted to become an aidoru fan...the aidoru being Miss Kobayashi herself. Before everyone knew it, the dragon maid amassed a whole plethora of Kobayashi paraphernalia and even the song "Ishukan Relationship" with the lyrics of "lick and kiss". Even the powerful Kanna and Ilulu couldn't hold up under the strain with the former making an emergency call to Miss Kobayashi at the office. Her rush home to see the insanity back at the apartment reminded me of the typical episode from "Bewitched" or "I Dream of Jeannie".

Was able to find the creditless version of the 3rd-episode ender with all of the tenderhearted scenes of Tohru and Kobayashi from the first season and the specials. Yuki Kuwahara（桑原由気）, Tohru's seiyuu, gives that supremely enthusiastic aidoru-like performance for the high-energy "Ishukan Relationship" in character. Even if we don't get that full single version, the one minute and thirty seconds are fine and dandy. Ginnojo Hoshi（星銀乃丈）who composed the regular ending theme for Season 2, "Maid with Dragons"（めいど・うぃず・どらごんず︎❤︎）, was behind everything for "Ishukan Relationship".

It looks like the finale may be a pretty heartwarming one with at least some of the story taking place at the annual summer festival with presumably the entire cast of characters. Will there be some sort of cliffhanger, though? Anyways it was a happy sophomore outing with "Kobayashi-san Chi no Maid Dragon S" and we'll be waiting with bated breath for the third season.

Now if only we can get a second season of "Gekkan Shojo Nozaki-kun"（月刊少女野崎くん...Girls' Monthly Nozaki-kun）. Please?