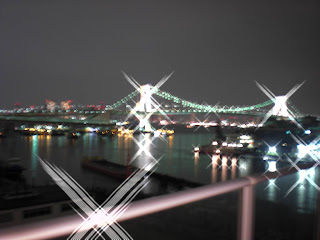 I was rolling through the backlog of songs that I could write about, especially an urban contemporary one since it is Friday today, and I did find one which might possibly have listeners irresistibly grab some sort of sipping libation, sit on a sofa and sigh peacefully. Even better would be having a high enough balcony to enjoy a sunset view.

Coincidentally enough, I was just talking about musician/arranger Satoshi Nakamura（中村哲）a couple of days ago for his work with the band Platinum 900 in the 1990s, and I mentioned even then that he's had a long and varied career helping all sorts of singers. Well, I tracked down his J-Wiki file and he's got a mighty huge block of clients for whom he has provided composing and arranging services. I've also read that he provided the soundtrack for a 1978 TV drama starring internationally famous action star Sonny Chiba（千葉真一）who passed away a couple of weeks ago. As well, Nakamura has helped out a few bands such as Spectrum（スペクトラム）, Prism, Paradigm Shift and Anzen Band（あんぜんバンド）.

Well, it looks like he had been able to gather some top-notch musicians to form a group called Satoshi Nakamura & Splaash (and yeah, the double-a is intentional) which released an album in 1979 titled "Splaash". Categorized on Discogs as a fusion and Latin jazz album, I gave the first track, "City Lights", a whirl and as I said in the introductory paragraph, this is a sipping liquor-friendly tune.

Of course, Nakamura not only composed and arranged "City Lights" but he also shared tenor sax duties with Yasuaki Shimizu（清水信之）. Katsutoshi Morizono（ 森園勝敏）and Kenji Omura（大村憲司）, who are also represented on KKP, are on guitar, and Nobuyuki Shimizu（清水信之）is on the acoustic piano among other stars who all help provide some relaxing bluesy fusion. Nothing better than this on a Friday night before a weekend (especially a long one that we will be having here in Toronto over the next few days) to chill out.