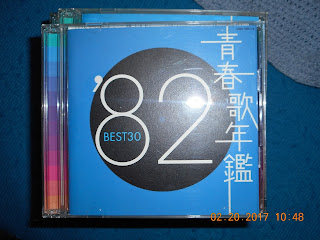 Welcome back to the weekly Reminiscings of Youth article. It was quite the time for me in terms of music back then. I got so much into Japanese music and also Western music with music videos, British New Wave and American R&B along with many other genres. To be honest, it was a wonder that I didn't end up draining my embryonic bank account but somehow I was able to keep on an even keel. Well, probably the guards who were my parents assisted in that.

The killer combination for me was New Wave/synthpop and music videos. I mean, there were folks like Thomas Dolby, Orchestral Manoeuvres in the Dark and Gary Numan, and for that matter, The Plastics in Japan and Spoons here in Canada. Music video was the wild frontier back then and it seemed like the New Wave guys were having a lot of creative fun with this particular canvas.

Another example was the British group Thompson Twins. Wikipedia has labeled them a pop group that first formed in 1977. They were initially seen as a New Wave band but then morphed into a more conventional pop unit in later years. Still, I think their October 1982 hit "Lies" is very much New Wave. Though I enjoy the song on its own merits, it was the music video that first hooked me. It just seemed to warn me that this is what would happen if a patient got a little too much anesthetic before surgery.

It wasn't the lies that got me...it was the syn-drums, the eerie synths and the loopy synth-bass that did. Yup, all that synthpop in one song, and it was a darn catchy melody by band members Tom Bailey, Alannah Currie and Joe Leeway. I'm just surprised that "Lies" only got as high as No. 67 on the UK chart and then No. 30 on the Billboard Singles chart in America. However, also according to the Wikipedia article on the song, it did hit No. 1 for a couple of weeks on the American dance chart early in 1983.

Normally, I would be putting up the Top Three Oricon singles for October 1982, but they've already been spoken for, thanks to another earlier ROY article for DeBarge's "All This Love" which came out that same month. Therefore, I'm going to go with Nos. 5, 6 and 7 instead.