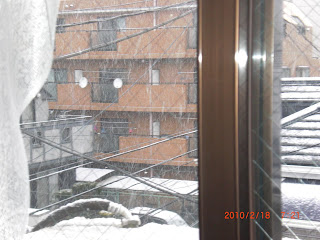 I recollect that I have put up this photo as an article thumbnail at least once before but just to remind folks, this is a view from my old apartment in Ichikawa one very snowy February day in 2010. Specifically, it's a view over the outside washing machine on my extremely narrow balcony. One observation that I've had about apartments and condos in Japan is that the corridors and stairwells are all exposed to the outside unlike in Canada and the United States where everything is interior. So, if you have some sort of hot pot party or the like in a Japanese apartment, most likely folks who want to get a smoke or get some fresh air will have to go out the front door and hang out there instead of squeezing onto the balcony.
And yet, I see the members of pop band Asagaya Romantics（阿佐ヶ谷ロマンティクス）happily enjoying life on a balcony of what looks like a pretty old apartment in the thumbnail image for the video above. Still, I think that it's a very appropriate shot of the guys because when I first introduced the band back in the summer of 2018 onto the pages of "Kayo Kyoku Plus", I had been writing about a bunch of us meeting up at a student's apartment in the Tokyo neighbourhood of Asagaya. We didn't crowd out on her balcony, mind you, but it was still a very homey and comfy visit so it felt like how the band looks like in the thumbnail.
By the way, the video here represents a track from the band's January 2017 album "Machi no Iro"（街の色...Colour of the Street）, "Dourotou" (Street Lights) created by Asagaya Romantics guitarist Tomoya Kishi（貴志朋矢）. I'm not sure of the lyrics but taking into consideration the title and the laidback nighttime melody, I could imagine that it is about a very pleasant evening ride in the convertible on the highway. Maybe it could be something that belongs in the city, but the arrangement doesn't quite sound Neo City Pop...just very dreamy pop aside from perhaps Kishi's rock guitar taking us home.
It's been almost a decade since I left my Ichikawa 2K and I still miss her from time to time, especially when I had friends over for dinner. Early on in my stay there, I even had as many as 20 people squeezed into the living room for that hot pot party, and yeah, it included a few guys who simply needed to get that smoke outside my front door.
Posted by J-Canuck at 8:30 PM