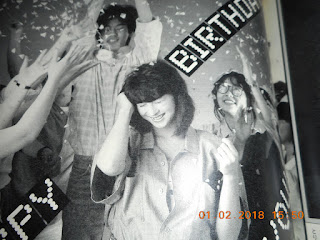 Belated birthday by almost a couple of months, but Naoko Kawai（河合奈保子）did turn 58 on July 24th this year so all the best to her and hers.

The more I delve into this early 1980s aidoru's albums such as "Summer Delicacy", "Daydream Coast" and "9 1/2", the more I'm convinced that Kawai was just as much a City Pop-influenced teen idol as Momoko Kikuchi（菊池桃子）. My previous article regarding the Osaka native was the relaxing "Home Again, Alone Again" from "Daydream Coast" and before that was "Natsu no Hi no Koi"（夏の日の恋）, a more City Pop take on Junko Yagami's（八神純子）straight-on Latin original.

Like "Natsu no Hi no Koi", "Machikado" (Street Corner) is a track on the 1984 "Summer Delicacy", and both of them are A-siders on the original LP. As such, they were both written by Masao Urino（売野政男）and composed by Yagami. However, arrangement for "Machikado" was handled by Shiro Sagisu（鷺巣詩郎）. The song is quite the interesting track in that I feel that it straddles that dividing line between City Pop/J-AOR and aidoru exactly. The rhythm has that urban vibe but the instrumentation with the strings and the keyboards still comes across as being very aidoru-friendly twinkly. The overall effect is happy and breezy, just the thing to feel before summer technically goes away in the middle of next week.