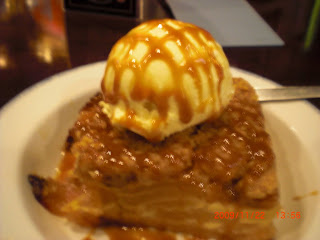 I could do with a bit of happy right now (for example, that slice of apple cobbler a la mode from The Hard Rock Café in Roppongi above) since I'm feeling downright exhausted at the moment. From early this morning, I had to run the gauntlet with a family member through public transit, rush hour and the worst street in Canada to get to a clinic so that he could get his eye issues resolved. Plus, I had to be on hand as an interpreter in an area that I'm not exactly well versed in: ophthalmology. Anyways, we're home now and the stress has taken a lot out of me so I really ought to be turning in early tonight.

Our enka specialist, Noelle Tham, has been doing the heavy lifting when it comes to the Kiyoshi Hikawa（氷川きよし）file on "Kayo Kyoku Plus". In fact, the last time that I covered one of his songs on my own was back in February 2018 with "Shoubu no Hanamichi"（勝負の花道）. And that's about as jaunty enka as one can get.

However in the last few years, Hikawa has been exploring other genres including hard rock and pop, and it is with this latter genre that I label his latest single, "Happy!", which actually got released today in Japan. Specifically, it is the Enka prince's 37th single.

I first heard "Happy!" on last week's episode of "Hayauta"（はやうた）from NHK and it's as poppy as "Shoubu no Hanamichi" is as enka as all get out. Written by Kunihiko Sugii（杉井邦彦）and composed/arranged by Yuuichi "Masa" Nonaka（野中“まさ”雄一）, along with the plenty of happy vibes, "Happy!" has also got a good dollop of samba to get folks' energies up. The official music video is also very happy with special guest star, actress and former Takarazuka Revue member Yuuki Amami（天海祐希）, wordlessly having some fun cutting up the rug beside Hikawa.

And that is because Amami will be starring in the comedy-drama motion picture "Rougo no Shikin ga Arimasen!"（老後の資金がありません!...We Don't Have Any Retirement Savings!）which is starting its run on October 30th. It deals with a housewife having to stop the financial bleeding from her supposedly happy home due to various causes. "Happy!" will be the theme song for the flick.