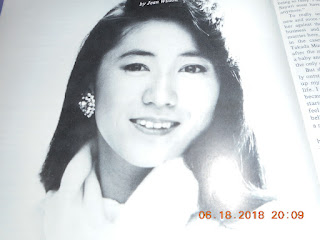 I gather that the powers-that-be or even the singer herself came to the conclusion that she and alcoholic beverages make a standout pair, and I don't mean that in a bad way at all.
With me being a casual jazz fan, Sayuri Ishikawa（石川さゆり）, who is usually an enka singer, stood out for her torch song "Whiskey ga O-Suki deshou?" (ウィスキーが、お好きでしょ）. I don't touch the stuff myself but even on ordering a Bailey's Irish Cream, I would probably end up having the song get into my head.
That particular single of Ishikawa was released back in 1990 and variations of it have made it onto Suntory Whiskey commercials since then. Not sure if the wine industry has been given the Ishikawa touch, but in June 2017, the veteran singer came out with her 115th single, "Shunkashuutou"（春夏秋冬...The Four Seasons） whose coupling song was "Wine wo Erande" (You Choose the Wine). This time, Ishikawa is going for not only a different alcoholic libation but a slight shift in genres: bossa jazz, always welcome music in my books.
The interesting observation here is that "Wine wo Erande" was written, composed and arranged by none other than Senri Oe（大江千里）, who began his career in the 1980s as the cutest boy wonder pop singer-songwriter but has since gone full bore into jazz. And with "Wine wo Erande", he has concocted quite the glass of velvety Brazilian with some robust class, hints of whirlwind romance and a soupcon of tease. On that note, I will end my sommelier analogy.
I was going to end it right there but then by happenstance, I came across this English-language interview with Oe about going from pop to jazz.
Posted by J-Canuck at 4:46 PM