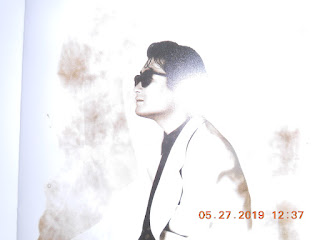 As I'm writing this, I'm also keeping an eye on the count board at CBC because there is a federal election on tonight, so I'm rather curious to know who will be continuing on or getting the new job as Prime Minister. Interestingly enough, there is that party election within the governing Liberal Democratic Party in Japan next week to find out who will be the next President of the LDP and therefore the next PM of that nation.

OK, let's get away from the political and head over to the more enjoyable sights and sounds of the band Stardust Revue（スターダストレビュー）. I can always depend on Kaname Nemoto（根本要）and company to provide some of that wonderfully upbeat and oft-funky pop. Case in point: we have "Ryuusei Monogatari" which I will translate as "Tale of a Shooting Star" as a slight pun.

A track from Stardust Revue's 6th album from July 1988 "RENDEZ-VOUS", "Ryuusei Monogatari" seems less about anything astronomical and more about the happily romantic as it sounds as if vocalist Nemoto is willing to take a lucky lady for a trip around the stars. The song was written by Nemoto and band percussionist Toshikatsu Hayashi（林紀勝）with keyboardist Yasuhiro Mitani（三谷泰弘）providing the synth-driven perky music. Although I've also categorized "Ryuusei Monogatari" as a City Pop tune since it has some of that urban feel, I'm wondering if it's more of some of that regular pop goodness.

"RENDEZ-VOUS" peaked at No. 17 on Oricon and later reissues of the album have also included a live version of "Ryuusei Monogatari" to wrap it all up.