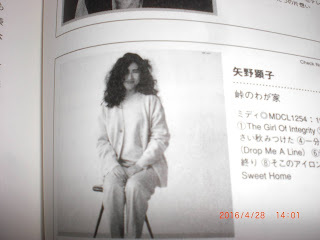 Well, it was quite the "Uta Con"（うたコン）episode with a number of songs to peruse and place onto the blog last night. I did get the s**t kingz as scheduled and it was kinda cute to hear the NHK announcer pronounce that name without any sort of irony. Then again, all of us here have been able to say the title of vaunted comedy "Schitt's Creek" for the past several years without giggling.

Anyways, another wonderful guest last night was the incomparable Akiko Yano（矢野顕子）. I never thought that I would ever see the veteran singer-songwriter appear on any television music show, let alone "Uta Con" but there she was, sitting beside enka singer Sayuri Ishikawa（石川さゆり）. I found out that the two of them have been good buddies for years, and they even apparently visited that spot on the top of the stairs for the Philadelphia Museum of Art where Rocky Balboa showed his power and determination.

In celebration of her 45th anniversary since releasing her debut album "Japanese Girl" in 1976, Yano released a new album, her 28th, in August this year titled "Ongaku wa Okurimono" (Music is a Gift). The singer performed the title track on the show last night with the same musicians who recorded with her: bassist Rei Ohara（小原礼）, guitarist Yoshiyuki Sahashi（佐橋佳幸）and drummer Tatsuo Hayashi（林立夫）. Plus, another treat is that Misia herself provided the chorus.

"Ongaku wa Okurimono" is a gentle but strong opinion on the power of Yano's medium all these decades and I enjoy the relaxing lilt of the arrangement as she plays on the piano. I was struck by her shoutouts to her friend, Taeko Ohnuki（大貫妙子）, and Carole King within the lyrics as she invited listeners to have a listen to their works. And I can imagine Ohnuki covering this very song with Yano accompanying although I wouldn't be surprised if the singer demurred simply because it would sound somewhat self-serving. What was also nice was seeing actress Non in the music video along with that splendid setting of the Tokyo National Museum. I've been to the huge institution in Ueno Park but I don't think I've ever made it to that particular area where Yano was playing. Gonna have to visit the place again.