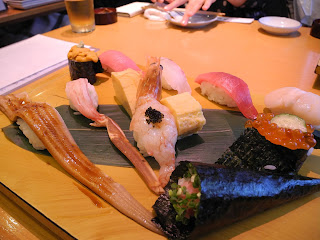 Good heavens! It's been exactly three years to the day that I put up my last Judy & Mary song. Must rectify. However, I do have to warn you that if you have some problems in viewing the gutting of fish, you might want to avoid watching the end of the music video below. Instead, enjoy the above photo of my sushi plate.🐟

Wow! It's really natsukashii hearing YUKI's voice once more after so long on "Brand New Wave Upper Ground", J&M's 18th single from February 2000. And YUKI really throws it (and herself) out there in this one especially (Ah-HOW! Ah-HOW!). My memory engrams did register hearing this one either through the countdown shows and watching the video on those same programs. Since I only got to see just excerpts of the band reveling about on their instruments, I'd assumed that the setting was one of the most chill underground lounges in the city when it was something else entirely.

Written by YUKI and composed/arranged by guitarist Takuya, "Brand New Wave Upper Ground" has that familiar Judy & Mary raucous rock sound that I've always knew them by back in my Ichikawa days. And man, I almost forgot how much of a rabid pixie YUKI is on stage and in videos. The single made it as high as No. 4 on Oricon and made it onto the band's first BEST compilation, "FRESH", from March that same year.

The song was also used to advertise another round of Pocari Sweat commercials back in the day.