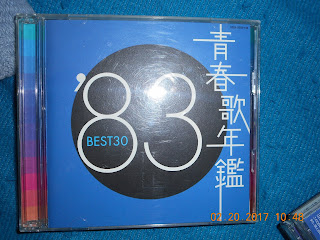 Of course, Bing Crosby's discography is bigger than "White Christmas" although whenever his name is mentioned, that particular song will be the first to come to mind to many. I've known that he was quite the crooner many years before he and Irving Berlin's legendary Xmas song for the ages were put together, and a few of his songs managed to get onto the old LP compilation of standards that our family had (or perhaps has...just misplaced).

But his "The Day You Came Along" is a new one for me. Created by the songwriting duo of Sam Coslow and Arthur Johnson, Der Bingle introduced it in his 1933 movie "Too Much Harmony" as a song of woo for that special someone.

The reason that I'm even introducing "The Day You Came Along" here in a non-ROY capacity is that I first encountered it as a cover by singer Tokiko Kato（加藤登紀子）under the title of "Akogare no Sora" (The Sky I've Wanted). It's a track on Kato's 1983 album, "Yume no Ningyo"（夢の人魚...A Siren Dream） whose concept is all about the music that was heard between 1914 and 1939, through the Taisho and early Showa eras. The singer produced the album alongside Ryuichi Sakamoto（坂本龍一）, and he was also the arranger for this particular playful track, according to Tower Records.

I've known Kato as the tenderhearted folk singer behind "Shiretoko Ryojou" （知床旅情）but over the years and especially listening to some of her other songs through my old radio program "Sounds of Japan", I also know that she's more than game with other genres. Listening to her husky voice tackle Bing's old song, she sounds as if she is a natural for old-style nightclub torch singing in the European establishments. Takao Saeki（佐伯孝夫）was responsible for providing Kato with the Japanese lyrics for "The Day You Came Along". I really enjoy the classy but, as I said before, playful nature of this cover version.

Come to think of it, I'm going to have to do a Reminiscings of Youth for "White Christmas" although that song was more than 20 years before my appearance on Earth.