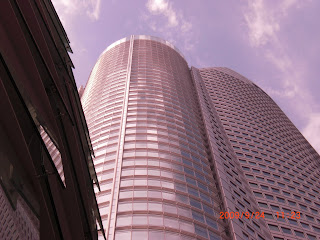 The one thing that I've noticed about all of my Rie Nakahara（中原理恵）songs on the blog is that they were all released in 1978! I guess she was one really busy singer or I really ought to be searching for more of her output in the later years.

Hey, though. It is City Pop Friday so I'm good with it. And so here is "Togire Togirete" which I believe is an expression referring to "Disconnection", although hearing those moans by the singer and the boppy bass which seems to have gone on to even better fame on the theme song for "Law & Order", I don't get the feeling that there was much disconnection going on that night...nudge nudge wink wink, know what I mean?

"Togire Togirete" is a track on Nakahara's debut album "Touch Me" from February 1978 and it's simultaneously downtown and dreamy, maybe the perfect environment for an adventure in Roppongi which is why I put up the photo of the Mori Building in that neighbourhood. It really does have that 1970s urban contemporary feeling especially with the horns and the chorus in there. Speaking of the chorus, I think that is keyboardist/singer Izumi Kobayashi（小林泉）since she was also the one behind the melody while Nakahara provided the words.