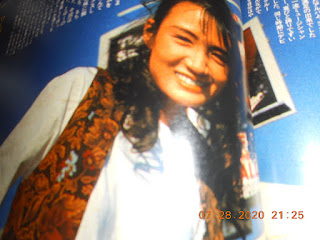 If I'm not mistaken, this is one of Mari Hamada's（浜田麻里）biggest hits that I had yet to cover so allow me to do that right now.

Ought to be giving myself a Gibbs slap upside the head since it was Marcos V. who put up the first Hamada article on "Kayo Kyoku Plus" all the way back in 2013. I should have written something about it sooner. But I'm rectifying the oversight here by writing about "Return to Myself ~ Shinai, Shinai, Natsu" (Won't Do It, Won't Do It, Summer). This was Hamada's 9th single released in April 1989, and armed with her own lyrics of change and empowerment along with Hiroyuki Ohtsuki's（大槻啓之）pop/rock melody, I still couldn't help but feel a bit of the rockier side of 1980s AOR from the West Coast.

At the same time, listening to "Return to Myself", I'm also reminded that the end of the 1980s was the time of Japanese female rock bands coming of age such as Princess Princess（プリンセスプリンセス）and Lindberg among others. Yep, those were quite the days. Hamada's hit was at the top of the Oricon Singles chart and achieved Platinum status before ending the year as the 15th-ranked single. It also became the title track for her 10th album released in June 1989, another No. 1 hit that was the 23rd-ranked album. It shares space with "Emotion in Motion", which was the topic of Marcos' article.