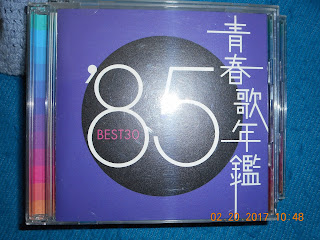 Looks like we've got our second "Yu" singer for today. Earlier this afternoon, I wrote up on Yu Hayami（早見優）since she's celebrating a birthday, and now here is seiyuu Yu Mizushima（水島裕）.

According to his J-Wiki profile, he's been playing anime characters since 1976 but he has also been dubbing for specific actors in Hollywood movies, one being Mark Hamill as Luke Skywalker in the NTV broadcasts of the original "Star Wars" trilogy. Now, the video here doesn't specifically state that it is indeed the Fukuoka-born Mizushima dubbing Hamill although when I punched his name and "Star Wars" into the YouTube search engine, this is what I got.

However, I'm not here to go ga-ga over the Japanese dubbed version of "The Empire Strikes Back". Mizushima also released his own set of singles and albums beginning all the way back in 1972; yes, I know that his seiyuu career didn't begin until 1976 but apparently he released his first single that year under a different stage name. Actually, his real name is Kenji Noda（野田憲司）.

Anyways, his final album to date was "Mujaki na Kankei"（無邪気な関係...An Innocent Relationship） from 1985 and doesn't he look cute in that candy-cane rugby outfit? I don't know whether the entire album is City Pop or J-AOR, but one track on Side A, "Autumn Wind", certainly has that vibe. I kinda figure with the cooler weather today and our distance toward the first day of fall getting smaller everyday, it was time to pull out the seasonal tunes. Besides, City Pop Fridays is upon us so why not get started several hours early?

Written by Tamamitsu Akaoni/Akaki（赤鬼玉光）and composed by Junichi Kawauchi（河内淳一）, the song screams so much 80s urban contemporary in Japan that I really needed to get that bottle of Perrier and that pink sweater wrapped around my waist. To be honest, Mizushima's vocals aren't bad but I don't think folks like Tatsuro Yamashita（山下達郎）and Makoto Matsushita（松下誠）will be shaking apart their guitars in fear. Still, the AOR keyboards with a bit of twinkly Doobie Bounce go down smoothly.