Alexander Courage -- Where No Man Has Gone Before 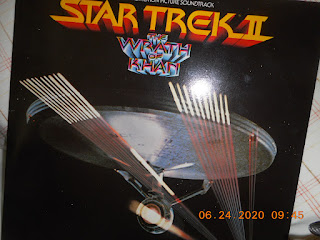 Just had to. As much as I am into Japanese popular music now, a few decades back, I had just as much ardor for "Star Trek". I remember coming back home from Japanese language school to catch the second halves of episodes of everyone's favourite starship on what is now CTV Toronto (the earliest that we could reach home after the bell rang at the Orde Street school was noon which was when the reruns began). Even earlier than that, I barely remember hiding under a cushion or a pillow when NBC did the first run of the episodes; the second-season ending credits always ended with the still of the ghostly image of Balok terrifying the heck out of me. Since then, it was all about collecting the various paraphernalia including starship blueprints, technical manuals and insignia, and then of course, catching the movies and new shows such as "Star Trek: The Next Generation".

Now, why am I waxing nostalgically here? Well, on this day 55 years ago, the very first regular-season episode of "Star Trek" aired on NBC, "The Man Trap". It wasn't one of the more cerebral episodes like the original 1965 pilot "The Cage"; I believe that the suits at the network wanted a typical sci-fi monster episode to start things off, and they got one in the form of the Salt Vampire up against Captain Kirk, Mister Spock and Dr. McCoy.

Of course, almost every episode and movie that featured the USS Enterprise had Alexander Courage's original fanfare. With the original series theme song which I have discovered was actually titled "Where No Man Has Gone Before" according to Wikipedia, there was the famous monologue ("Space, the final frontier...") first intoned by William Shatner that still manages to get contemporary "Star Trek" fans all shivery.

I know that the original Courage theme had undergone its own iterations over the years, and what I say next may be sacrilege to all those fans, but I've always preferred the first-season version of "Where No Man Has Gone Before". It's the one which doesn't have the soprano singing but just the orchestra playing away with the Enterprise whooshing by.

The Courage theme has been performed on TV since the original run of "Star Trek", and I even included Maynard Ferguson's disco version of it earlier this year to commemorate William Shatner's 90th birthday. I even heard it once being performed on an episode of "Lawrence Welk" (you just had to be there). Then, of course, there was its inclusion in the ending credits for J.J. Abrams' "Star Trek" (2009) which probably had folks cheering.

My interest in "Star Trek" has waned quite a lot in the last several years due to my lukewarm response to the movie sequels by Abrams and the latest TV series such as "Discovery" and "Picard". However, on hearing that today was the 55th anniversary of "The Man Trap", I still had to devote something to my old sci-fi fascination.

So, what debuted in September 1966? Just have two here for this special ROY article.