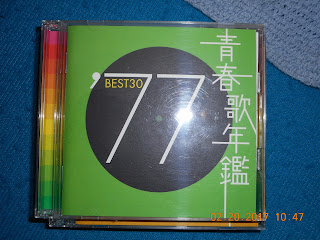 Commenter James Noah and I had a small conversation on sumo rikishi who haven't only tussled in the dohyo but also sung behind the mike. One famous example is Daishiro Masuiyama（増位山太志郎）but as KKP co-administrator Noelle Tham has written, several wrestlers have also banded together to provide traditionally-arranged songs.

Remembering back to my childhood, the very first sumo wrestler that I had ever seen was actually not even Japanese. He's currently known as Daigoro Takamiyama（高見山大五郎）but was born Jesse James Wailani Kuhaulua in Hawaii. Launching his sumo career in March 1964, his Wikipedia article relates that he achieved a number of firsts in his 20 years as a rikishi such as the first foreign-born wrestler to win a tournament (1972) and the first foreign-born wrestler to get his own stable in 1986...a stable that includes fellow Hawaiian Akebono（曙）who reached the exalted top rank of yokozuna. Takamiyama himself got as high as sekiwake, the third-highest rank in sumo.

However, I was too young and didn't have ready access to Japanese television to have ever seen Takamiyama actually perform in his chosen profession back in those days. In fact, I only got to know him in his second career as adorable commercial pitchman, something that he was doing even while he was still doing his yorikiri and oshidashi to defeat competitors. The things that stood out to me were his enormity and those sideburns which were big enough to deserve their own postal codes.

I had kinda figured that it was so but I didn't confirm it until yesterday that Takamiyama put out some singles. At the time, anyone who was that popular in Japanese pop culture was bound to be gently persuaded to cut a few records. Sure enough, the big lug did put out a couple of singles and a couple of albums.

Judging from the abrupt cuts of different songs, I gather that the person involved wanted to bring an aural summary of "Super Jesse" the album from 1977 under the Toshiba label. I think that it's the single "Super Jesse", also from that year, that launches the album with Masami Sugiyama（杉山政美）and Toshiyuki Kimori（木森敏之）as lyricist and composer respectively. Instead of either an enka/Mood Kayo or an ondo style, Takamiyama and his group decided to go for some disco and funk with the big man himself not taking himself too seriously as he approached singing in the same way that he approached his opponents...just get the words out as fast and hard as possible in that familiar rasp.

If I recall, Akebono himself has starred in his fair share of commercials.