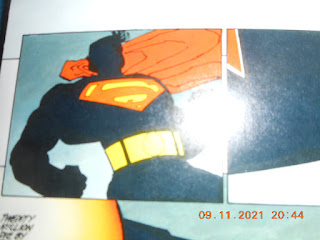 Well, I figure that if I've just put up an article connected to Batman earlier this afternoon, then why not give equal time to The Man of Steel?

Now, both "Batdance" and "Superman" by Toko Furuuchi（古内東子）have been given the J-R&B label but that is where the similarities end.  Whereas "Batdance" is the epic funkiness by the late Prince, "Superman" is some cool and smooth soul written and composed by Furuuchi.

A track from her March 2004 album "Futsu no Koto"（フツウのこと...The Usual Thing）, "Superman" is an upbeat urban tune about a fellow who feels like Superman himself as he drives the long distance in his jalopy to see his significant other, presumably after a period of time following a disagreement. I can imagine Clark doing the same with Lois although in his case, he obviously doesn't need the mechanical contrivance or even frequent flyer points. Will always appreciate some fine horns in the mix and generally the happy beats. Plus, it's a nice way to close out September in a season where the older Japanese music likes to usually take the melancholy road.

Whaddaya know? I found the Japanese dub of the opening credits for "Adventures of Superman" which was my own first exposure to the superhero as a toddler.

Email ThisBlogThis!Share to TwitterShare to FacebookShare to Pinterest
Labels: 2004, J-R and B, Single, Toko Furuuchi