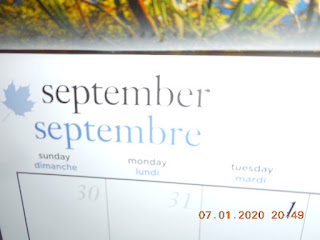 I just kinda thought, "What the heck!". Let's get some September songs up here. For some reason, September-themed kayo seems to be the most frequent of all of the months, although I think May and August are up there as well. I'm also going to throw in a couple of my favourite American September tunes as well since the 21st is coming soon. Most of them have already been written about on the blog so I'm only going to provide commentary for just one song here.

And this is the song..."September Song" which was originally a song introduced in 1938 in the Broadway musical "Knickerbocker Holiday", and from what I've heard of the various versions, it's usually arranged in a very soft and wistful style. However, the first version that I had heard was the one by The Ames Brothers via that LP collection of standards that my father got with his RCA Victor stereo back in the 1960s. The reason that I remember it so well is that this version is so jazzy and upbeat that it can only be made for cutting a rug in front of the jukebox. If anyone can inform me when exactly this version was recorded, I will be grateful.

The last two are the original and jazzier versions of this song. I couldn't really leave either one behind.