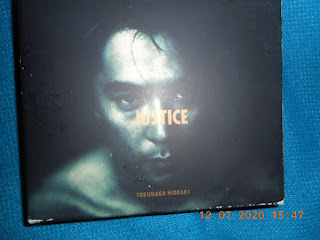 I didn't think that I would be writing an article on Hideaki Tokunaga's（徳永英明）6th studio album from October 1990, "JUSTICE", tonight. However, I popped it into the TEAC last night and then afterwards decided, "Why not?". One of the tracks, Tokunaga's 10th single, "Kowarekake no Radio"（壊れかけのRadio）, already has its own article so you can have a look at that one.

Listening to the first track "NEWS" for the first time in a long time brought back some nostalgia for me since this is a pretty dramatic way to start "JUSTICE". With the music by Tokunaga (all of the tracks were composed by him, in fact), the lyrics are by Hitoshi Shinohara（篠原仁志）which describe an uncertain world but a man and a woman feel as long as they are together, they can overcome anything.

Looks like the Greek island of Mykonos has been given the Casablanca treatment by Tokunaga as "Mykonos". The singer was responsible for words and music here as it's all about the romantic intrigue on the island. I think "Mykonos" is probably the track that solidly hits the City Pop beats on "JUSTICE"; the lyrics might be thousands of kilometres away but the music keeps things solidly in Tokyo.

I think that there is also a bit of the urban and the urbane with "Kaerenai Futari"（帰れない二人...The Couple Who Won't Return）, a ballad also created by Tokunaga. A couple shares what could possibly be their final night together as they walk along the beach, hoping that the night lasts forever since the inevitable coming of the next day will mean the first day of their lives no longer together. It's poignant especially with that saxophone coming in near the end.

Before I forget, almost all of the tracks were arranged by folk singer and songwriter Ichizo Seo（瀬尾一三）. The one exception is this one, "Douhyou"（道標...Signpost）, which was taken care of by musician Ryoichi Kuniyoshi（国吉良一）. I have to give my compliments to the uploader for this B-side to "Kowarekake no Radio" since his thumbnail of an empty classroom is appropriate for this innocent song of gratitude as a couple remember that one day in high school when they realized that they were meant for each other. As was the case for the far sterner "NEWS", Shinohara and Tokunaga were behind this one.

I'll finish this with the title track itself which finishes the album. "JUSTICE" is an appropriately heroic anthem by Tokunaga about pushing through all of the obstacles of life and the city to realize that love is all. Yup, the sentiments are pretty sentimental but "JUSTICE" is the type of song to finish off one of his concerts and have the audience roaring and sobbing into their handkerchiefs. Plus, it's a reminder to me that Tokunaga has one heck of a voice.

"JUSTICE" hit No. 1 on Oricon. I have to also mention that Tokunaga had a mighty crew of musicians contributing their talents such as guitarists Makoto Matsushita（松下誠）and Masaki Matsubara（松原正樹）, drummer Jun Aoyama（青山純）, the aforementioned Kuniyoshi on both keyboards and sax, and a backup chorus consisting of Rajie（ラジー）, Yasuhiro Kido（木戸やすひろ）and Junko Hirotani（広谷順子）.