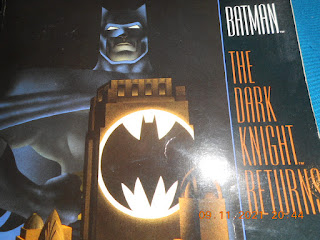 Being a member of a certain generation, the first Batman that I got acquainted with was the TV version from the 1960s with the late Adam West as a campy Caped Crusader fighting with fists, batarangs and day-glow onomatopoeia on the screen. I hadn't known that Batman first appeared in comic books as a much darker and dangerous hero, but all that changed with Frank Miller's 1986 comic miniseries "The Dark Knight Returns" when the World's Greatest Detective was given his old obsessed personality back.
And that led to the stylishly gothic and ambitious Tim Burton 1989 film with Michael Keaton and Jack Nicholson. That year was indeed the Year of the Batman with all sorts of news features, trailers, merchandise and talk about how a comic actor who was the goofy Beetlejuice the year before could ever become cast as the Dark Knight. There were tons of howling protest about Keaton's casting but apparently all that went away when the movie came out during the blockbuster season. Still, the actor and character had a mighty duel to fight against Nicholson's Joker who almost stole the entire movie.
Interestingly that year was the same year that I graduated from University of Toronto and headed over to Japan to start my very first full-time job as a teacher on the JET Programme. In fact, I left Canada just a few weeks after "Batman" was released in theatres and it was the final film for me and my friends to watch together before leaving on my Japan odyssey.
There are all those YouTube videos of frenzied audience reactions for "Avengers Endgame". I remember watching "Batman" on the big screen and the audience then was just screaming and cheering right from the start when the title came on to Danny Elfman's epic theme. And it simply continued when key scenes came on such as the "Get in the car" scene. It was quite the experience and a fine cinematic sendoff for me to Japan. Incidentally, "Batman" didn't get out into theatres over there until December.
The JET briefing manual which I had received as part of my kit to get ready to teach the masses instructed me on how to use pop culture to make English more palatable to the kids. So I tried to infuse some of Batman and Joker into the lessons instead of Dick and Jane but the sage observation was that the superhero and supervillain were still more (not-Adam) West-centric, so perhaps Anpanman and Baikinman were better. The whole "Dick Tracy" thing the following year fared even worse, though I tried.
Within all of the Batman hoopla in 1989, only one incredible artist could make his contribution stand out and apart from everything Bat. Prince already has representation on "Kayo Kyoku Plus" because he provided dynamic singer Kahoru Kohiruimaki（小比類巻かほる）with a couple of tracks for her "Time The Motion" album which had come out the same year. Well, he also provided the film with his own creation "Batdance" which got the regal welcome in June 1989 when "Batman" was released.
Perhaps just like the movie, "Batdance", the song and the video, is epic and bizarre...and in addition, it's Princely! Naturally I was listening to plenty of Prince songs throughout the 1980s (and I'll have to cover "When Doves Cry" sometime soon as a ROY article), and therefore when I encountered "Batdance" on MuchMusic here in Canada, I just thought that this song could have only come from the mind and soul of Prince. It's got all of the rock, the funk, the dance beats and excerpts from the movie itself all smashed into a chaotic whole and visually expressed in the music video which could have played every night on stage off or on Broadway if Prince had desired it. Not surprisingly, "Batdance" hit No. 1 in both Canada and the United States.
I've read that Keaton is putting on the cowl again for "The Flash" which is scheduled to come out in a little over a year from now. Can only imagine the cheering that he will get when he shows up again to say "I'M BATMAN!".
So what were the Top 3 of Oricon for June 1989?
1. Princess Princess -- Diamonds
2. Mari Hamada -- Return to Myself ~ Shinai, Shinai, Natsu（しない、しない、ナツ。）
3. Shizuka Kudo -- Arashi no Sugao （嵐の素顔）
Posted by J-Canuck at 4:05 PM