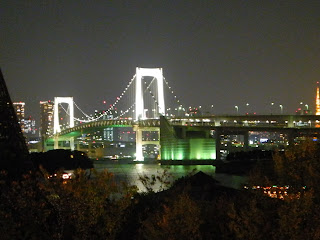 Despite the facts that the neighbourhood is built upon a mix of reclaimed land and garbage and there are numerous signs all over the area warning that if there were a strong enough earthquake, the ground would liquefy, Odaiba in Tokyo is still a gosh-darn fun place to be.👍 Not only are there shopping malls galore to satisfy most shopping and dining needs, there are hotels, the Big Sight convention centre, the Fuji-TV complex and other establishments all tied together with train lines, highways and a free bus that circles around Odaiba. 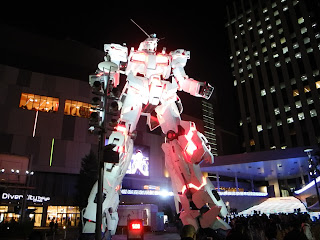 Moreover, there are plenty of places for the exuberant shutterbugs such as a fine night view of Rainbow Bridge and the big lug above this paragraph.

But no, this is not the place for a tourism spiel on Odaiba. In fact, I'm just doing all this to introduce guitar-playing City Pop bon vivant and songwriter Toshiki Kadomatsu's（角松敏生）"Moonlight Tokyo Bay" from his 1989 album "REASONS FOR THOUSAND LOVERS". The title of romantic salaciousness aside, "Moonlight Tokyo Bay" is quite the tour de force musical stroll which begins in a relaxed manner but then decides to go soaring off into the sky as if that Gundam Unicorn whips out the ultimate surprise and actually flies off from Diver City.

As much as I've described some of the spots in Odaiba, "Moonlight Tokyo Bay" as well has got some delights right within its performance. The comments function has been shut off for the YouTube video above but if commenters were able to put in their two pennies, they would be marveling at some of the musicians involved: the Steve Gadd on drums, the Jerry Hey handling the horn arrangement and the Jay Graydon with the guitar solo among other great talents (a lot of definite articles being used here). I fully remember that it was Graydon who took on the legendary solo for Steely Dan's "Peg". It makes me wonder who did Kadomatsu have on on his Rolodex at the time.

Of course, at the time that "REASONS FOR THOUSAND LOVERS" was released, I think Odaiba was pretty just bay water, not coming anywhere near its current configuration until at least the mid-1990s. But still, the view of the skyline was probably already looking quite impressive even back then. In any case, the album hit No. 4 on the Oricon weeklies.