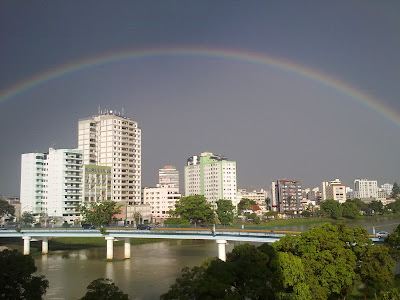 I don't live in a postcard city like Rio de Janeiro, but the town where I live, called Resende, is also quite charming... especially when the nature helps. This photo was taken in 2012.

Earlier this year, I shared a selection of Japanese songs that were inspired by Brazilian music genres here on Kayo Kyoku Plus called Marcos V.’s Special Selection: Love Letter to Brazil. It wasn’t a new idea, as I’ve done a similar exercise at least once many years ago, but I believe I’m more suitable to its challenges right now… basically because I’ve been paying more attention to these crossovers recently. Also, considering that there are a lot of Japanese pop songs composed and arranged like samba or bossa nova (which is something quite surprising to me, honestly speaking), I could probably build countless of these selections. Many of the songs are very faithful to Brazilian rhythms and composing style, while another good chunk is just vaguely inspired. I like both types, though, so I decided to post five Japanese songs, plus a Brazilian one at the end, but in a very free manner, without worrying so much about authenticity or things like that. I just happen to like them, and they remind me of the rich musical heritage of my country… even if, in this case, filtered by Japanese lens.

It was not easy to choose this one among many other Brazilian-inspired pop songs released by Megumi Hayashibara (林原めぐみ) since she began her singing career. Originally released in 1991 as an image song to the OVA adaptation of Yuzo Takada’s (高田裕三) manga “3x3 EYES”, “Distance” is curious because it has nothing to do with Brazil or Latin American, since its lyrics, if I’m not mistaken, are closely related to the character Pai (パイ), voiced by Hayashibara, who alternates between a sweet and innocent Tibetan girl and a powerful, ancient, three-eyed demon who lives inside her (hence “3x3 EYES”). Anyway, the music is clearly samba-inspired, just don’t ask me why, and I love Hayashibara’s raw vocals from her early days. “Distance” was later rerecorded and included in her second album, “WHATEVER”, released in 1992.

Besides Pink Lady (ピンク・レディー) and The Beatles, I believe Chisato Moritaka (森高千里) is also a big fan of bossa nova/samba, since she has recorded many Brazilian-inspired tunes through the years. “Modorenai Natsu”, an early example of this trend in her discography, is probably the one I listen to the most, mainly because it’s kind of relaxing and features a nice arrangement filled with jazzy keyboards, a sometimes relentless cuíca and the rich instrumental breakdown. It’s not one of Moritaka’s strongest vocal performances, though, but her breezy vocals are also kind of charming. “Modorenai Natsu” was included in the singer’s third full album “Mite” (見て), which was released in 1988.

Toshiki Kadomatsu (角松敏生) is probably best known for the City Pop sound he explored through the 80s, but the man kept releasing quality stuff even after the dawn of the Bubble Era, with 2010’s “La Carnaval”, from the album “Citylights Dandy”, being a nice example. This time, though, there’s no obvious urban City Pop quirks, as Kadomatsu uses his musical experience to create a song full of Brazilian rhythms and swing. Just like Moritaka’s “Modorenai Natsu” beforehand, Kadomatsu also engages in a jazzy piano solo here.

Easily one of the rarest Japanese singles I’ve ever listened, Aya Matsumoto’s (松本彩) “TOKYO Wagamama Musume” is as bouncy as a Japanese take on samba can be with its nice percussion and that melodic short guitar solo in the instrumental breakdown, even though, apparently, it has nothing to do with Brazil in its thematic. Anyway, I really like the inclusion of cuíca (well, based on the examples above, it seems like Japan loves to include those when doing a Brazilian-inspired song) and samba whistle in the arrangement. Unfortunately, besides this single, which was released in 1989, Aya Matsumoto just vanished from show business and never released other songs.

A promotional song from the Tomato n’ Pine’s album “PS4U”, which was released in 2012, “Odore Carnaval”, lyrically speaking, is a big mishmash of a song, but in a good and fun way. It mentions lots of Latin American countries (including Brazil, of course), cities and words related to their music genres, contains the Italian expression “mi amore” and evokes a hot, sweaty and tropical party… all of this behind a discofied Carnival-like sound. Everything is very stereotypical here, combining lots of different things into an amorphous Latin song, but I don’t have a problem with that at all, since it’s so well done and cute. The original video (which I’ve found with English and Portuguese subtitles on the link above) is also a treat, so let’s just ‘mawasu, mawasu, mawasu, mawasu, mawasu’ with these girls forever and ever.

To finish, here's a song by Gilberto Gil, one of Brazil’s legendary singer-songwriters. This is a thrilling forró version (forró is a music genre from Brazil's northeastern region) of “Toda Menina Baiana” (which can be translated as “Every Bahian Girl” or “Every Girl from Bahia”), one of his many hit songs, which was originally included in the album “Realce”, released in 1979. I almost need to get up and dance every time I listen to this song.