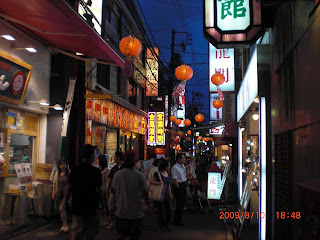 I gotta say...in all these years of admiring Off-Course（オフコース）songs, I don't think any of their fans or I have encountered a single such as this one by Kazumasa Oda（小田和正）and company. A couple of years ago, I wrote about the band's 25th single from April 1984, "Kimi ga, Uso wo, Tsuita"（君が、嘘を、ついた）, a seething and sinister song of romantic betrayal and a furious need for payback. It wasn't just the fact that the song was far and away from their usual folk and/or AOR tunes but it was also about the observation that this time this wasn't a ballad about the aftermath of a slow and sad breakup which used to be Off-Course's lyrical bread and butter.

Then, there is the B-side to "Kimi ga, Uso wo, Tsuita", "Ai Yori mo" (More Than Love) which is as much a thematic flip as it is a literal one of the original 45" single. Oda didn't have anything to do with the songwriting here. It was actually two other members: bassist Jiro Ohma（大間ジロー）and guitarist/keyboardist Kazuhiko Matsuo（松尾一彦）who created this down-and-dirty song.

The lyrics are short but they are to the point. I think that it's all about the sex act here...a lot of talk about two people melting into each other. Nothing extremely graphic, mind you, but the image is fairly easy to imagine. And once again, melodically, "Ai Yori mo" feels quite different from the usual Off-Course tune; it's more of a bluesy rock showcase. Unfortunately, I don't know my rock bands too well, so perhaps one of you readers can identify what type of rock and rock band Ohma and Matsuo were trying to emulate here. My thought for this one is way out of left field...perhaps from that part of the parking lot behind left field. Listening to "Ai Yori mo", I get that feeling of British band Tears for Fears but with no synths and all brass included.

As with "Kimi ga, Uso wo, Tsuita", "Ai Yori mo" was also a track on Off-Course's June 1984 album, "The Best Year of My Life" which hit the top of the Oricon chart. Maybe with "Ai Yori mo", the dude had the best night of his life. 😈