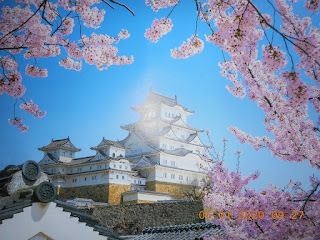 "Sakura Sakura" (Cherry Blossoms) has been one of those traditional Japanese folk songs that I have probably known since birth, and it's likely that it's the one song of Japan that is known even by folks who don't listen to any of the genres of Japanese music. When my family was first introducing me to Japanese cuisine not created by Mom via the general Japanese restaurants in downtown Toronto, the delicate koto-driven sounds of "Sakura Sakura" often greeted me through the speakers. And forgive my primal Pavlovian reaction, but because of the above, whenever I hear the song, I get that old taste of either teriyaki beef or tempura in my mouth. By the way, the first Japanese restaurant that I ever visited was Nikko Gardens.

Information on the song can be found at Wikipedia and the points that got to me were the fact that the songwriter behind the iconic "Sakura Sakura" doesn't seem to be identified and that it's been popular since the Meiji Era! I assumed all this time that it had been created many more centuries before the 19th century.

I did find a version of "Sakura Sakura" from famed composer and jazz musician Hachidai Nakamura's（中村八大） 1961 "Rainy Night in Tokyo" which I bookmarked since whoever arranged this version (Nakamura himself?) seems to have imbued it with a certain amount of drama as if it were meant to be a romantic movie in itself. I have to say that I really like the cover on that album with a precipitation-soaked Ginza; lends to the intrigue and mystery of the capital city, I gather.