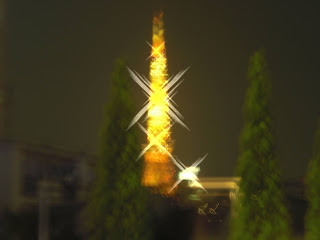 Well, that was the last time I ever used the sparkle function on my old Casio camera while under the influence. Incidentally, that was...barely...Tokyo Tower.

Speaking of one of the megalopolis' prominent landmarks, I have this debut single by singer-songwriter Mutsumi Inoue（井上睦都実）titled "Boyfriend" and its coupling song "Tokyo Tower" from October 1992. I actually first wrote about her last month when I featured her "Nitamono Doushi"（似たもの同志）from July 1994 and that particular number was quite the smooth summery tune and it does distinguish itself from the two songs from Inoue's first single.

For one thing, both "Boyfriend" and "Tokyo Tower" have varying levels of Shibuya-kei in there. There's some swinging jazziness in "Boyfriend" which was written by Inoue and composed by Tsugumi Kataoka（片岡嗣実）from the duo Parquets. The marimba does help too in conveying that Shibuya-kei although I think it's more of a light dusting over a jaunty pop feeling. From what I hear from Inoue's lyrics, it seems like the most cheerful kiss-off of a relationship that I've heard in a while.

At 4:04 is "Tokyo Tower", another fairly rollicking song with some deeper Shibuya-kei imbued in its genes, thanks to Takao Tajima（田島貴男）from Original Love providing the melody this time around, and the marimba is still there along with a happy electric organ. To remind folks, Tajima had also been a vocalist for genre icon Pizzicato Five some years earlier. Inoue also penned the lyrics here. For both songs, Inoue has got some fine crisp and clear vocals as she would for "Nitamono Doushi".