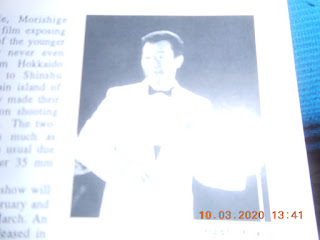 When I celebrated the first anniversary of "Kayo Kyoku Plus" at the end of January 2013, I chose the kayo "Muhyou"（霧氷）, the haunting 1966 hit by Yukio Hashi（橋幸夫）because it is a song that I had heard since I was literally a toddler but didn't know the title nor the singer at the time. However, thanks to a viewing of the previous NHK incarnation of the regular kayo show "Kayo Concert"（歌謡コンサート）a few weeks earlier that had Hashi appear and perform "Muhyou", I finally found out the truth. The (re-)discovery of that song was an early example of me finding out some of those lost kayo in my head.

Guess what? Another kayo lost in the ancient windmills of my mind has been unearthed once more, and moreover it was yet another NHK kayo show and the same singer involved. Yesterday, I was finishing off a KKP article and then headed back to the living room where the TV was showing an episode of "Songs of Japanese Spirit", and it turns out that there was a tribute to the late composer Tadashi Yoshida（吉田正）. I then heard this song that hadn't actually actively entered my ears in decades but had popped up every so often in my brain.

And the reason that this dusty kayo remained stuck in my head all these years without a singer's name or a title was that it possessed this very dynamic arrangement. Yukio Hashi's "Ano Ko to Boku ~ Swim Swim Swim" (That Girl and I) sounded like some sort of soundtrack from a 1940s Hollywood adventure into Africa, especially with a haunting but relentlessly chanting chorus which included a battery of "Yeah, yeah, yeah"! The rhythm came across as a melodic expression of a tribal custom as filtered through Tinseltown.

"Ano Ko to Boku" was a June 1965 single by Hashi (his 68th) that was composed/arranged by Yoshida with lyrics by Takao Saeki（佐伯孝夫）, and despite that exotic sound, the song is actually all about the whirlwinds of love and hedonism on the beach. It's definitely not enka, the setting and the really active melody don't put it into Mood Kayo either, but that rollicking rhythm seems to throw "Ano Ko to Boku" into some gray zone between Group Sounds and kayo that is perhaps described as Rhythm Kayo which is the genre that the song has been put into according to the J-Wiki article.

This became a huge hit for Hashi, and though Oricon was still a few years away, it was placed at No. 1 in the monthly magazines of "Myojo"（明星）and "Heibon"（平凡）. In addition, having "Ano Ko to Boku" sell over 700,000 records within two months of its release was another nice sign of its success. It also won a Grand Prize at the Japan Record Awards and then even had Hashi appear for his 6th straight time on NHK's Kohaku Utagassen to perform the song with a number of his fellow White team members (including actor Kiyoshi "Tora-san" Atsumi) getting in on the act. To put the final cherry on top, a movie with the same title was released just several weeks after the single's appearance on the record store shelves with Hashi starring.

Glad to cross off another mystery kayo from my mind.