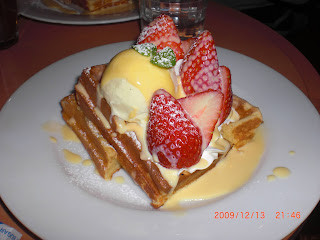 Uncertain where I took this photo...Japan or Canada? The massive size of those strawberries and waffles would indicate my hometown of Toronto (maybe at Café Demetres) but the date on that photo in the bottom right seems a tad early for my Holiday trips back home. So who knows? I'm sure that it was a delicious dessert.

Anyways, we have singer Naomi Miyanaga（宮永尚美）for her third time on "Kayo Kyoku Plus". In her first two articles on the blog, I featured a couple of her tracks from her 1984 debut album "Moment": "Summer Rain" and "Party ni Furarete"（パーティーにふられて）. Having a listen to those two once more, I found them on the mellower side of City Pop.

Miyanaga's 2nd album (and possibly her final album) was "Che~!"（チェッ!...Tsk!）in 1986, and the cover has the smiling singer looking like she's about to paint the town as red as that background. "Love Collector", a track provided to her by lyricist Ken Takahashi（高橋研）and composer Yuji Toriyama（鳥山雄司）, is definitely more laden with the beats. There seems to be an infusion of Hitomi Toyama（当山ひとみ）dynamism which would imagine some of that American West Coast danceable form of R&B of that decade. As I said, Miyanaga looks ready to party hearty and her voice has taken on some more sultriness.