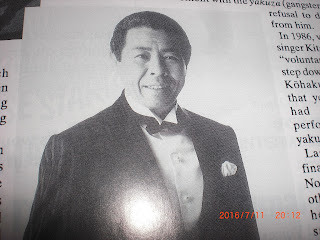 I know that it would have been hoping beyond hope that I could actually find the specific episode for NHK's variety show on names "Nihonjin no O-Namae"（日本人のおなまえ...Japanese Names）, but I put up an episode up here just for reference's sake. Anyways, a few nights ago, I watched that one particular episode in which the folks were talking about why the names of Fukuoka（福岡）and Hakata（博多）were used for the same region. Supposedly around a century ago, there was a fierce battle between sides supporting the two names over which one should win geographically, and it was won by one slim vote for the Fukuoka side for the official maps. However, I guess in a "let bygones be bygones" move, the main railroad station got to be called Hakata Station, and of course, we have that tasty Hakata ramen.

Well, I figure the above would make for a nice enough preamble ramble to introduce another of Saburo Kitajima's（北島三郎）"Hito" series. This time the song of note here is "Hakata no Hito" (Woman of Hakata) and I gather that even pop culture was siding more for Hakata. With the "Hito" series, "Hakodate no Hito"（函館の女...Woman of Hakodate） is arguably the one Sabu-chan song to which all of the other "Hito" songs are compared.

And compared with the jaunty "Hakodate no Hito" from 1965, the July 1967 single "Hakata no Hito" is a much more wistful affair beginning with a lovelorn Harry James-like trumpet and a harp, as Kitajima sings about returning to Fukuoka, not knowing whether a woman he used to know has gotten married or not and probably not wishing to find out or even to see her again. It's slightly bittersweet as the protagonist walks by the famous landmarks of the area. After all, a go-tochi song has to provide plenty of shoutouts to those notable places.

The same folks behind "Hakodate no Hito" were also behind "Hakata no Hito": lyricist Tetsuro Hoshino（星野哲郎）and composer Nobuo Shimazu（島津伸男）. Let's hope that Kitajima didn't just cry into his beer but into his bowl of rich Hakata ramen, although the broth wouldn't need the extra saline.