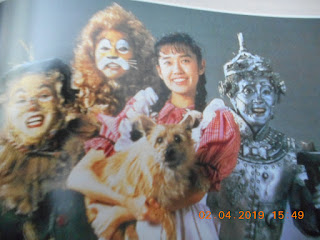 Maybe this could be the beginning of Japanese pop singers' Birthday Alley. I say this because a mere couple of days ago, it was Anri's（杏里）birthday so I celebrated with an article for her, and now today, I find out from someone I'm following on Twitter that it's the birthday today of 80s aidoru Yu Hayami（早見優）! Although Japanese music genre-wise, Anri and Hayami may inhabit different areas, both of them have been known for their sunny summery ways.
Well, then, for today, I offer you her 9th single from March 1984, "Yuuwaku Kousen Kura!" (Temptation Beam Flash!) which is this slightly disco-ish and nimble tune about a girl trying to nudge her boyfriend into a higher level of the relationship. The dynamic duo of lyricist Takashi Matsumoto（松本隆）and composer Kyohei Tsutsumi（筒美京平）came up with this very Hayami-esque number which won an award in the Pop division for the 3rd Annual Megalopolis Kayo Festival（メガロポリス歌謡祭） sponsored by TV Tokyo. Plus, Hayami sang it for her second appearance at NHK's Kohaku Utagassen as the top batter for the Red Team. The arrangement was handled by Masaaki Omura（大村雅朗）.
"Yuuwaku Kousen Kura!" tied with her arguably most famous song, "Natsu Iro no Nancy" (夏色のナンシー）, at No. 7 on Oricon as her highest-ranked single, and it finished 1984 as the 85th-ranked single. One last thing that I'll mention about the song is that the very last line, "Wakaru deshou? Ne ne ne"（わかるでしょう?ネッネッネッ）reminds me of a very famous catchphrase from the Monty Python gang (from about 2:00 below).😁
Posted by J-Canuck at 2:33 PM