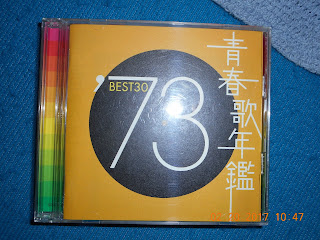 In October 2018, Kevin Lozano of the website "Pitchfork" contributed a fine article ostensibly on Haruomi Hosono's（細野晴臣）debut solo album "Hosono House" (May 1973) but actually delving into that album and some of his others from the 1970s and 1980s. His point was that there was more to Hosono than just being a part of the technopop pioneers in Yellow Magic Orchestra (of course, YMO in itself was an incredible achievement and influence on music). Since then, with interest in overall Japanese popular music of the past building thanks to the "Plastic Love" phenomenon around the time that Lozano's article was publicized, perhaps the author's wishes may finally be getting realized with listeners discovering Hosono's own music-laden past with Happy End（はっぴいえんど）and Tin Pan Alley（ティン・パン・アレー）in the early to mid-1970s which was far away from the technopop.

The reason I mention all this is that I wanted to cover Hosono's first track on "Hosono House", the quiet but happy-go-lucky "Rock-a-Bye My Baby". When I first laid eyes on the title, I'd assumed wrongly that Hosono was covering some old American pop song from the 1960s but this was actually his own creation on all fronts. In fact, "Rock-a-Bye My Baby", even listening to the LP or CD, sounds like an intimate experience as if Japan's music legend invited himself into your abode to play this on the acoustic guitar and you're happy that he did so. I imagine that Hosono's lyrics are all about enjoying time with that significant other on a bright sunshine-y day in the park with a local diner awaiting your patronage (meat loaf and mashed potatoes for me, thanks!).

Simply my opinion here but because this was Hosono's solo debut after breaking up with rock band Happy End, I think that he wanted to start off the album with something that was very different from that rock sound which he had created with his bandmates. Therefore, Hosono came up with this simple bluesy guitar-driven ditty about a happy day outside. Lozano did mention in his article that Hosono had wanted to come up with "virtual American country" for "Hosono House", and there is something very old country genteel about "Rock-a-Bye My Baby" as if this should be listened to while sipping a Mint Julep in a rocking chair on a wooden stoop. At the same time, there is something about that basic rhythm which had me remembering the theme song for the 1960s "The Dick Van Dyke Show" and a standard that was often played in a number of Warner Bros. cartoons.

In 1975, a couple of Hosono's contemporaries covered "Rock-a-Bye My Baby". One singer was Minako Yoshida（吉田美奈子）who recorded her version as the final track on "MINAKO", her 2nd studio album from October of that year. Hiroshi Sato（佐藤博）arranged the song as a breezy and groovier take with a hint of bossa nova. Although the YouTube video of the actual recorded version exists here, I wanted to include the live version above since it's difficult to find an early Yoshida performance.

Folk singer-songwriter Kyozo Nishioka（西岡恭蔵）did his own cover of the song earlier in July 1975 as the title track of "Rock-a-Bye My Baby" the album. I think the arrangement is similar to the Hosono original although there is a bit of that breeze in Nishioka's version as well. Incidentally, that original was used as the ending theme for the 2015 second season of the anime "Atashin'chi"（あたしンち...My Home） focused on the antics of a family in Tokyo (although despite the thumbnail image of the Tachibanas above, the Nishioka cover is being played).

To wrap up, here is Nishioka on television to sing "Rock-a-Bye My Baby". For some reason, the credits which pop up at the beginning of his performance have Nishioka behind words and music. Hopefully, Harry didn't take that personally.