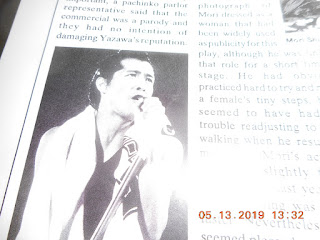 I generally don't do follow-ups of other contributors' works on "Kayo Kyoku Plus" only because that contributor totally writes it all in his or her articles so there is no need for me to follow up. Noelle Tham provided her article on Eikichi Yazawa's（矢沢永吉）"Tomaranai HA~HA" (Non-Stop HA HA) back in early 2018, and she wrote about it being a real banger (for a night out probably in the more dangerous areas of town) as well as it being a crowd-pleaser at the singer-songwriter's concerts.

Not to say that Noelle didn't put her all into "Tomaranai HA~HA". She certainly did but I was so tickled pink by this very quintessential of Yazawa hits that I also had to put in my two pennies. Yazawa doesn't drink BOSS Coffee here...he IS the BOSS! He struts about as if he owns Kabukicho or Roppongi and has no idea or care about fellow strutters Mick Jagger or James Brown.

In the music video, he not only laughs off three younger gang toughs like annoying mosquitoes but putts golf on a tabletop like a BOSS! Meanwhile, he sings Tetsuya Chiaki's (ちあき哲也) lyrics as if he's clearly enjoying a Wagyu steak. Eikichi, who also composed the boss melody, is simply loving hedonism in the big city and has no time for sappy love songs. It's Friday night...let's paint the town red, even if there's a bit of blood mixed in!

As mentioned in Noelle's article, "Tomaranai HA~HA" was included as a track on Yazawa's July 1986 album "Tokyo Night" (東京ナイト) and a number of succeeding albums.

Apparently, television also knew a good thing when it saw one. Fuji-TV used it as the theme song for a recurring show called "IPPON Grand Prix"（IPPONグランプリ）centering on comedians. I don't think I've ever seen funny guys look so cool in a credit sequence. In addition, "Tomaranai HA~HA" has also been used as the entry tune for many a professional athlete including retired baseball legend Ichiro（イチロー）and boxer Daiki Kaneko（金子大樹）. Can you imagine walking into a stadium with this anthem behind you?