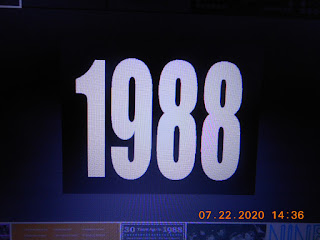 A little over a month ago, I wrote up an article about a song by the pop duo Milk who contributed it to the 1988 soundtrack for the anime "Earthian"（アーシアン）. "HANASANAI" has that downtown City Pop vibe which brings to mind Roppongi and any of the disco-populated areas of Tokyo.

Then I found this track which leads the album off, "Dream is Alive" by the producer of the album himself, singer-songwriter Kingo Hamada（濱田金吾）, and while this song still keeps things nice and urban, the arrangement seems to deposit listeners higher up in altitude...namely, they are left floating up in the night sky. Hamada is indeed behind the mike for "Dream is Alive" and he was also the composer while Kazuko Kobayashi（小林和子）took care of the lyrics. Hamada and Kazuhiro Hara（原一博）arranged everything.

The intro's synthesizer is so appealingly spacey (following 18 seconds of percussion) that at first I was wondering whether the good folks at PSY-S had something to do with the song, but nope, it's all Hamada. We all do drop down from suborbital space into the more pleasant and breathable nitrogen-oxygen mix (and probably some smog) over the city...still floating over the skyscrapers and pretty lights below (thank you, sax solo). I think that both "Dream is Alive" and "HANASANAI" could also make good additions to a "City Hunter" soundtrack.