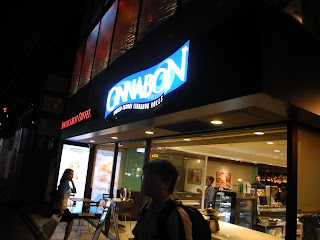 Yup, Cinnabon had its time in Tokyo as well...perhaps well over a decade ago. I remember the shop in one of the malls in Odaiba; the entire first floor of the complex perpetually had that distinctive aroma of cinnamon whenever I went there. That worked better than any advertising.


Anyways, I had my regular talk with JTM over the weekend and we were swapping information on various singers from the 80s and 90s, and one person he mentioned was GWINKO. Now, I had heard of GWINKO years ago and I recollect perhaps a Myojo article about her, but I kinda pooh-pooh'ed her off as one of the many aidoru that came and went during the 1980s.

However, JTM described her as being the female equivalent of Toshinobu Kubota（久保田利伸）! Wow! That got my attention. So she was a budding R&B type, eh? I then decided to look up her material on YouTube and found this one song titled "Yokubari na Weekend" (Greedy Weekend) which was her 5th of 7 singles from July 1990. I was fortunate that there was an official music video and once I looked at it, yep, I could see why my friend compared her to Kubota.

Plus, she could dance hurricanes around Kubota according from what I saw on the video (man, all that fashion back then)! Looking at the Okinawa-born GWINKO, who was born Ginko Kaneshiro（金城吟子）in 1973, I was stunned to realize that she kicked up her heels with her other dancing partners at the age of 17 in "Yokubari na Weekend"; I thought she was well into her 20s, and I mean that in the best sense of the word.


Junko Ohyama（大山潤子）wrote the lyrics of a young lady having the time of her life in the big city while Ichiro Haneda（羽田一郎）and Takuo Sugiyama（杉山卓夫）brought in some of that snazzy funk-pop seemingly right from the United States. I kinda wonder whether GWINKO and all those dancers were inspired by Paula Abdul. In any case, another singer that I was set right about.
Posted by J-Canuck at 9:29 PM

Email ThisBlogThis!Share to TwitterShare to FacebookShare to Pinterest
Labels: 1990, GWINKO, J-R and B, Single