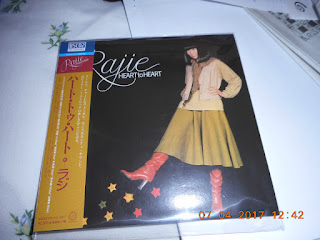 I already identified the pop singer Rajie as Atsuko Souma（相馬淳子）right in the very first article for "Hold Me Tight" some years ago. But what I didn't do back in that very brief June 2012 piece was how she came by her nom de guerre. According to J-Wiki, her name of Rajie came from a character named Raji (played by Sajid Khan) from the 1966 movie "Maya".

One of my other recent acquisitions from Tower Records Japan was indeed her debut album "HEART to HEART" from September 1977. I've listened to the album twice now and I am enjoying it. Two other albums by Rajie have already been covered in the blog: her 1980 "Mahiru no Hodou"（真昼の舗道）by nikala and "Quatre" from 1979 by me.

My overall impression of the album (and nope, I realize that two listenings are not going to provide the deepest insights) which was produced by Yellow Magic Orchestra's Yukihiro Takahashi（高橋幸宏）is that unlike those two later albums, there isn't any sign of the technopop which would come out in varying degrees among the tracks in "Mahiru" or "Quatre". However, I'm starting to think that there was an interesting parallel between Rajie and singer-songwriter Taeko Ohnuki（大貫妙子）. I mentioned it in "Quatre" and nikala also hinted at it in "Mahiru".

The second track at 3:53, "Shizuka na Hitomi"（静かな瞳...Quiet Eyes）is a bluesy ballad written by Etsuko Kisugi（来生えつこ）and composed by Takahashi. It's a bit of musical introspection about a woman who is trying to figure out the man in her life since he's an unreadable fellow. The song reminded me of Ohnuki's output from her first two solo albums "Grey Skies" and "Sunshower" which were very much in the New Music genre. In fact, listening to "HEART to HEART" and then knowing what she did since then, her vocals and career direction has me thinking that she could have been Ohnuki if she hadn't veered that far into technopop and that European mood going into the 1980s.

Track 3 at 7:18, "It's Me...It's You" sends my above point even further with its galloping melody and the chorus work. I actually thought it was Ohnuki lending backup vocals here but according to the liner notes, Rajie was responsible for those. And even though, Ohnuki doesn't provide any songwriting for any of the songs, I personally get a few echoes of her in Rajie's delivery and the surrounding music. Takahashi and Chris Mosdell took care of the lyrics here while Tsugutoshi Goto（後藤次利）came up with the melody. The other point on this parallel between Rajie and Ohnuki is that the backup musicians and songwriters assisted both singers for their albums.

Along with "The Tokyo Taste" which has already been covered in a recent article, "Sarasara no Machi"（さらさらの町...Smooth Town）at 12:07 is my other standout favourite in "HEART to HEART". But unlike the former song which is quite the slick downtown City Pop tune, "Sarasara no Machi" is a much more whimsical non-City Pop happy-go-lucky song about life in the burg. I'm not quite sure where Rajie was referring to but I would like to know. I bet the residents skip to and from work there. Still, my old home in Ichikawa was a decent neighbourhood as well. Kisugi and Goto took care of the songwriting in this case.

My final track for tonight is "Suteki na Feeling"（素敵なフィーリング...Wonderful Feeling）at 22:30 which has Machiko Ryu（竜真知子）providing lyrics about a woman head-over-heels in love. There is even a shoutout to Cinderella in there. Composer Goto starts things out with a very 1970s atmospheric ballad feeling but it quickly switches to a pleasant Latin number. 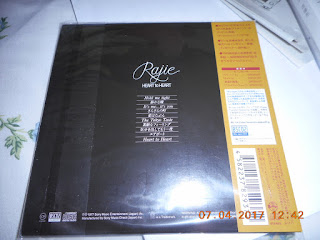 There are a few more tracks in "HEART to HEART" but I will leave them for future articles. However, suffice it to say that Rajie's debut album has a little bit of most everything in terms of straight-ahead pop since quite a few top songwriters came and helped out. I'm a bit surprised that this album and Rajie herself didn't get more notice in the world of Japanese music, but then again, the situation lends a bit of attractive exclusivity as if I've come across a previously unknown delight that I'm sharing with a few others.
Posted by J-Canuck at 10:15 PM