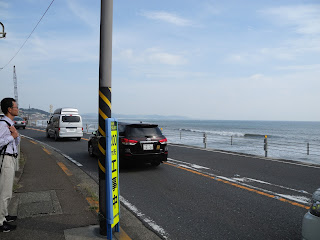 I've been hearing about all of the hot and humid weather that has been barraging itself onto the Japanese archipelago over the past few days (and will most likely continue well into September). Well, those over there wringing their hands and their handkerchiefs will probably be swooning in envy since here in Toronto today, it's damp and the temperature may barely peak above 20 degrees Celsius (68 degrees Fahrenheit). It was quite cool going out for that walk earlier this morning, especially wearing track shorts. But then remembering the sauna that was my experience of a Japanese summer, I was quite comfy.


"Uta Kon"（うたコン）had its summer song theme a couple of days ago and the first song up that night was an old 1967 tune by the Group Sounds band, The Tigers（ザ・タイガース）, Kenji Sawada's（沢田研二）former unit. "Seaside Bound" was their 2nd single released in March of that year, and it was the tune that apparently cemented their status as hit makers. The cover performance on "Uta Kon" had me interested in the song and sure enough, listening to the original convinced me that there was nothing like the original to illustrate what the GS sound was all about.


"Seaside Bound" was written by Jun Hashimoto（橋本淳）and composed by Koichi Sugiyama（すぎやまこういち）, and as performed frenetically by The Tigers, it was that Go-Go music which makes for an interesting comparison with the band's most famous single, the melancholy "Hana no Kubi Kazari"（花の首飾り）a year later. I gather that Oricon was still about a year away from charting the hits but there was no doubt about the success of the song since it sold 400,000 records and scored a No. 2 ranking through the "Young Music" magazine.

The above video is of The Tigers coming back for a concert in 1982. Sawada was already well into his glam rock days but it was nice of him to peel off the makeup and put on the cute suit again to do the ol' Group Sounds again.
Posted by J-Canuck at 2:38 PM