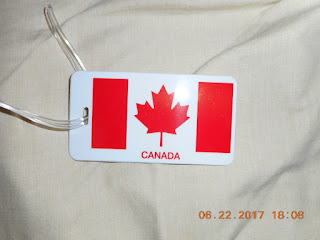 For those who are not aware, July 1st is Canada Day. And this Canada Day was a bit more auspicious than most in that 2017 celebrates our nation's 150th anniversary since Confederation. So most of us are taking notice of the Great White North's sesquicentennial. It's just too bad that I only had this luggage tag as a thumbnail. I had been planning to go out on June 30th to take some photos of the more festive areas of Toronto but since the weather was lousy, I've postponed it until July 3rd which is still part of the long weekend.

Once again, I was left thinking about a song that I could feature in tribute to Canada. I've already covered the most famous kayo tune about my country, the karaoke-friendly "Canada kara no Tegami"（カナダからの手紙）, and I even wrote about an obscure pop ballad sung atypically demurely by Junko Ohashi（大橋純子）titled "Canadian Lullaby"（カナディアン・ララバイ）.

Well, last month when I wrote about Yosui Inoue's（井上陽水）cool and rumbling "Make-up Shadow", I found out that his next (34th) single from November 1993 was "Canadian Accordion"! That title alone had me shaking my head. I know that the Canadian sport is ice hockey, Canadian food products include poutine and maple syrup, and of course, the Canadian tree is the maple. But a Canadian musical instrument?!

I'm not sure how Inoue was inspired to come up with "Canadian Accordion" but he whipped it up as the theme song for an NHK morning serial drama "Karin"（かりん）which seems to take place entirely in Nagano Prefecture right after the war. Perhaps it was all of the woody wilderness from the setting that had Inoue thinking of my country. Anyways, the ever-bespectacled fellow wrote the lyrics while veteran composer Kyohei Tsutsumi（筒美京平）created the melody which seemed more apropos for my cruise down in the Caribbean back in May. In any case, although Inoue doesn't croon the word Canada once in his lyrics, he does describe the stereotypical sylvan setting that would fit that drive from Calgary Airport to Banff (once and perhaps still a popular destination for Japanese tourists) while a fellow is trying in vain to extract the arrow from his heart due to a lovely passenger on the bus. He can only hope that he can get that love letter from Canada someday.

"Canadian Accordion" managed to reach No. 35 on Oricon. As for me, we all had a pretty quiet unassuming Canada Day as would usually be the case for Canadians. We're proud but simply not as gung-ho about the national birthday as our neighbours down south would be. In any case, I will finish things off by leaving you a video on how poutine is made at the most famous poutinerie in all of Canada, Smoke's. Maybe someday, a Japanese songwriter will come up with a song for that dish. "Tasogare Poutine", anyone?