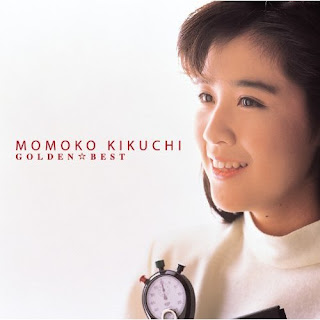 菊池桃子/Kikuchi Momoko has been frequently featured on Kayo Kyoku Plus and for good reasons as she was one of most recognized and popular of the 80s idols. At the height of her popularity she could be seen almost everywhere from the pages of the gavure magazine that bears her name 『Momoco』 to the various CMs that used her as their image model (グリコポッキー, ライオン-アクアミー, ハウスチョコケーキ2, ダイドードリンコ, 資生堂-アクネ, 日立-マスタックス) to appearing in movies like 『テラ戦士ΨBOY』 and 『パンツの穴 』 to TV drama appearance like in 『卒業-GRADUATION』.

J-Canuck has already covered much of モモコ's history and background in previous posts but I'll just add some additional trivia. モモコ was actually discovered in quite an unusual way. Her aunt owned a restaurant in Aomori and it was in one of her shop photos (in which she had been in) that caught the eye of a talent scout who then signed her up for a modeling contract.

According to J-Wiki, in 1984 モモコ's ブロマイド/Bromide photo sales ranked her as the No. 1 popular new idol for that year (in fact the catch phrase 「It's Real Fresh 1000%」was attribute in relation to her during this time). Yet when it came time to select the Best New Artist for the "Record Taisho" Awards ( 第26回日本レコード大賞新人賞受賞), モモコ was snubbed by the show and the award went instead to another fresh-faced, up-and-coming idol 岡田有希子/Okada Yukiko.  It is said that her snub was the result of her association with her record company VAP and their business dealings with certain TV studios. モモコ will get vindication that same year when her debut single 「青春のいじわる」 would reach No. 1 in the オリコン charts.  モモコ retired from her musical career in the late 80s/early 90s to devote herself more to acting and her CM work. Since then she has married and had two children.

While モモコ has released a number of best hit albums beginning with 『THE GREATEST HITS - マジェスティック・トウェルヴ』 (1989), followed by the comprehensive 2 volume set 『スペシャル・セレクションI/II』 (1993) and the massive CD/DVD box set collection 『プレミアム・コレクション LEGEND/BRAND』 (2003), I decided to go with VAP's relatively low-key 2011 release 『ゴールデン☆ベスト』 which was part of their series of "Best" collections for various artists. It pretty much has all of her major hits and even includes one of her collaborations with the Rock/R&B fusion group ラ・ムー as well as a few later career songs.

My personal favorite from the bunch is definitely her 6th single release 「もう逢えないかもしれない」which was used as the CM image song for グリコ 「ポッキーチョコレート」 and was a No. 1  オリコン hit for her in 1985.  The commercial was so melodramatic and done in an almost mini-movie format with モモコ desperately trying to see her boyfriend again before he leaves on a train heading out from their small country town. Waving goodbye to the boyfriend, she looks doe-eyed into the camera and eats her ポッキーチョコレート. Very sweet. It was covered by European musician Donna Fiore in her 2008 album "'Fiore" (which also featured a cover of 斉藤由貴's 「卒業」 )

Another favorite is her collaboration with ラ・ムー the upbeat 「愛は心の仕事です」 which was another CM song used for  ダイドー「JUICE100」. It wasn't a huge hit for モモコ and ラ・ムー but I liked it a lot for モモコ's signature ethereal  locals. This CM definitely freaked me as it superimposed a child's face onto the image of an orange that gave the effect of the orange saying "hello" to モモコ.

While most of the early songs were atypical lovesick idol songs filled with sentimental and almost sappy lyrics her later songs like 「Nile in Blue」 (inexplicably missing from this collection) and especially her songs with collaboration with ラ・ムー were somewhat more edgy I felt.

While it would have been nice to include some of her B-side songs like 「アドレサンス」, 「ANATAKARA FLY AWAY」 , 「夕暮れのEXIT 」, 「EDEN of Galaxy」 for comparison, their absence here isn't that great of a loss.

While certainly nowhere near comprehensive 『ゴールデン☆ベスト 』 is a great overview of モモコ's music career from her debut to her later ラ・ムー years and a couple of her later career songs.


Not to toot my own horn but please feel free to visit my Live365 web radio station where you can hear many of the songs featured here at Kayo Kyoku Plus.
(Unfortunately Live365 has gone out of business as of 2016.)

70 & 80年代アイドル, ニューミュージック, 歌謡曲の懐かしい 思い出 音楽勢ぞろい.
Bringing you the best in 70/80s idol, “New Music” and retro songs.
We also play your favorite 90s and current songs.
We also take your requests.  Just give a shout-out and we will play it.
リクエストもやります.
Posted by JTM at 1:57 AM