Today I’m going to talk about “OVERHEAT NIGHT”, the second single released by Chisato Moritaka (森高千里), in October 1987. After talking specifically about the song, I make some considerations about the fashion style portrayed by Moritaka and some other sexy idols that were active during the late 80s/early 90s.

In general, “OVERHEAT NIGHT” is a disco inspired song with some eurobeat elements. We can find three different versions of the song in Moritaka’s discography. The single edit version, the full album version found in the “Mi-Ha” album (ミーハー) and the “new recording” version found on the “Moritaka Land” best album (森高ランド). The version presented in the beginning of the article is the single edit and its video features a young and not-very-sexy Moritaka. My favorite one, however, might be the “Moritaka Land” version. Therefore, I decided to share the version performed on the “Mite Special Live” (見て ~スペシャル~ ライヴ) from 1989 (one of my favorite idol concerts ever) because it is similar to the one found on the “Moritaka Land” compilation. This specific recording of the song is even more disco inspired, with a groovy bassline and some nice synth work. Also, we can note that Chisato, during the “Mite Special Live”, makes use of her typical and famous sexy/pin-up persona.

Making some comparisons, we can relate Moritaka’s music to Minako Tanaka (田中美奈子), Aya Sugimoto (杉本彩) and Reiko Katou (かとうれいこ), three idols that were relying heavily in disco/eurobeat inspired songs at the time. About Minako Tanaka, I remember that when I first watched her singing in a TV show, she was almost a replica of Chisato Moritaka: the long/straight/black hair, the up-body outfits, the mini-skirts and, of course, THE LEGS (in my humble opinion, Moritaka’s were better). Aya Sugimoto and Reiko Katou, on the other hand, were overly sexual examples of late 80s/early 90s idol. So, based on these four girls (Chisato, Minako, Aya and Reiko), we can see that a different kind of idol, not focused just on the cute look, was emerging in Japan around the late 80s/early 90s. Therefore, it’s quite suggestive that during the so-called “winter era of idols” or “idol cold age” (Idols and Celebrity in Japanese Media Culture. PALGRAVE MACMILLAN, 2012, p. 24), this new kind of feminine representation came to light in the Japanese idol world.


(I'm sorry but the Kato video has been taken down.)

Although I’m not a late 80s fashion expert, I noticed that Chisato and Minako were influenced by some outfits used in England during the SAW (“Stock Aitken Waterman” production team) heyday. I selected, for example, a performance by singer Sinitta. The name of the campy/cheesy song is “Toy Boy” (1987) and the male dancers’ choreography/outfits are creepy as hell, so forget them and focus on Sinitta, please. Basically, we can see that her clothes are not so far away from the outfits used by the two sexy Japanese idols mentioned above. (I'm afraid that particular video has been taken down but here is the original music video.)


Curiously, I remember watching a 2007 Japanese comedy/sci-fi movie called “Bubble Fiction: Boom or Bust” (バブルへGO!! タイムマシンはドラム式) and, as the title reveals, the movie is passed in 1990, when the bubble economy times were going down of the roof. The plot is kinda cheap and is not very interesting for this article, but the hairstyle and outfits used by the actresses (not Ryoko Hirosue [広末涼子], the main one, because she was a time traveler from 2007) were very similar to the ones used by Chisato Moritaka and Minako Tanaka. As I didn’t live/visit Japan at the time (I couldn’t as I was born in 1990), I can’t really tell if that kind of look was trendy, but based on Chisato, Minako and this particular movie, I created some sort of image of Japanese girls fashion during the late 80s/early 90s. Also, I don’t know if this fashion style was common in the United States as well. I need to check this better someday. But take a look at one scene of the movie below. The song playing in the background is, of course, "Diamonds" by PRINCESS PRINCESS (プリンセス プリンセス), the number one song of the year 1989.


As I said earlier, “OVERHEAT NIGHT” was Moritaka’s second single, released in October 1987. The single reached #24 on the weekly Oricon chart and sold around 22,000 copies (source: generasia). The song was placed in a full format in her second album “Mi-Ha”, released in March 1988. It was later included in three compilations: “Moritaka Land” (1989), “The Best Selection of First Moritaka 1987-1993” (1999) and “The Singles” (2012). The song was written by Hiromasa Ijichi (伊秩弘将) while the music and arrangement were made by Saito Hideo (斉藤英夫).

Even though “OVERHEAT NIGHT” isn’t Moritaka’s best, I enjoy it a lot, and it was one of her first songs that hooked me. So I consider it a special song.

To end this article, here’s a photo of my own copy of “The best Selection of First Moritaka 1987-1993” compilation. “OVERHEAT NIGHT” is the second song from the first disc. 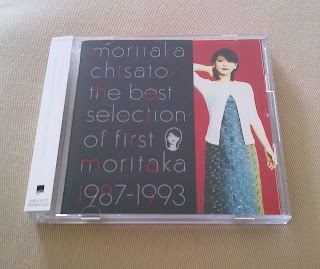