Ladies and gentlemen: possibly the biggest scandal in the history of Kouhaku Utagassen: 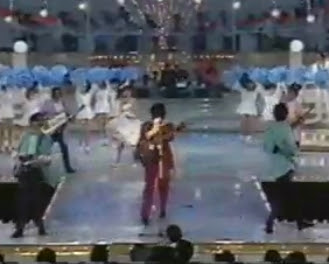 This entry is a commentary, or rather a commentary of commentary to commentary, namely the post of J-Canuck, where we saw Koji Tamaki performing in Kouhaku Utagassen after a long absence, that was commentary to Nikala’s post of Music Tomato. I made a mistake in my commentary and I have tried to correct it here.

I just wonder what kind of commentary this is leading to…

Kouhaku Utagassen 1985 didn’t begin particularly well. In the beginning of show newcomer Koji Kikkawa (吉川 晃司 ) performed his song Nikumare souna NEW FACE (にくまれそうな NEW フェイス), bringing some brand new rock’n’roll touch to the show. In fact, Kikkawa was rocking so hard that during one single performance he managed to achieve the following unique feats:
1) sprinkle champagne all over the stage
2) burn his guitar in real flames
3) blow the aforementioned guitar to smithereens in the next moment (never shown on tv)
4) delay Naoko Kawai’s performance and
5) cause Toshikazu Fukawa to slip, twice, because of the spilled liquor still on stage.
No doubt that Koji Kikkawa succeeded in becoming the most talked about performer of the night.

All this was very unfortunate to Naoko Kawai (河合 奈保子) whose single Debut –Fly Me To Love- / Manhattan Joke had become the first and only Oricon number 1 of her career. She had to begin her performance in the middle of song. While orchestra was already playing Debut, Kikkawa and his bandmates created a strategic wall of two guitarists so nobody could see what Kikkawa was up to before it was too late.

Later it was explained that Fukawa had planned his slipping as a part of his act. He was singing about how his feet felt slippery. Kikkawa apologised humbly to Kawai that he ruined her performance. To Naoko Kawai’s credit, she was the calmest and most forgiving person of the whole incident. She simply said to Kikkawa that “What happened, it happened, and that’s about it”.

However, NHK was not so forgiving. Jimi Hendrix style not-giving-a-damn attitude was too much, not to mention the official safety regulations. Who in his right mind burns a guitar in an indoor venue? Koji Kikkawa was promptly banned in NHK. He was finally allowed to return to NHK Hall for a tv broadcast 13 years later, in 1998.
Debut –Fly Me To Love- was written by a hit machine of composer Tetsuji Hayashi (林 哲司) and lyricist Masao Urino (売野 雅勇). The writers of Manhattan Joke were even bigger names. Composer was jazz musician Yuji Ohno (大野 雄二), the man behind Lupin III themes and music of series. Lyrics were written by a fellow called Yasushi Akimoto (秋元 康). I am sure I have seen that name somewhere. Manhattan Joke was the opening theme of anime movie Lupin III: Legend of the Gold of Babylon, whose character design I honestly dislike. Heads remind me of eggplants and body proportions are insane. Watch Fuma Consipracy instead. (Also have a look at J-Canuck's article on the single!)

Naoko Kawai performed in Kouhaku Utagassen yet in 1986. After that she gradually retired from music business and concentrated in tv dramas. Suddenly in 2006 she made a comeback and released two disks of vocal piano music she had composed herself. Not a typical comeback for a former 1980’s idol!

During recent years only DJ Ozma has been able to repeat Koji Kikkawa’s amazing feat and becoming banned indefinitely. In reality the masses of “nude” dancers who performed with DJ Ozma in Kouhaku 2006 were dressed in skin-coloured body suits. Even THE living legend Saburo Kitajima (北島 三郎) participated in performance, but that didn’t help DJ Ozma’s case. No wonder Yukie Nakama was a bit of a loss after this colourful show number.

Remember, you don’t do this in Kouhaku Utagassen. At least not twice!