"Kimi no Furusato wa" (Your Hometown) is the third of those Rumiko Koyanagi（小柳るみ子） classics that I used to hear as a kid, along with "Watashi no Joukamachi" and "Seto no Hanayome". Like the two singles, it has that calming combination of guitar, strings and some form of marimba with Koyanagi's high voice to transport the listener back to that old hometown in rural Japan whether it be Hokkaido or Ehime Prefectures.

Never remembering the title, (it was just by dumb luck that I could literally bump into the song again) it was awfully hard to track this one down....a bit surprising considering that the other two songs were Koyanagi's classics. But as it turned out, "Kimi no Furusato wa" was never released as an official 45" single although it was a track on her 2nd album, "O-Matsuri no Yoru" （お祭りの夜...Night of the Festival) which was released in November 1971. But the song was included on what was a special mini-album of sorts which included all three songs plus one other which my parents had brought over. It's kinda too bad that "Kimi no Furusato wa" wasn't made into a single; I think it has had as much of an effect on me as the others have had on my nostalgia genes. 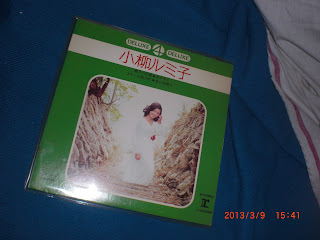