Gotta have Takao Tajima's（田島貴男） coat there in the video. Considering that Toronto barely reached -15 degrees C today, that would have been one fine fashion accoutrement out in the cold. In any case, I also said the same thing about his song, "Primal", when I first heard it almost a couple of decades ago, and for that, I was very successful.

"Primal" is Original Love's 8th single released in February 1996, and it was used in one of the NTV dramas "Only You - Aisarete"（愛されて...To Be Loved）. And yes, it's a song that has its heart on its sleeve if I can use that tortured metaphor. I love the strings and piano combination here....just brings that dramatic oomph to the proceedings, and then with Tajima's falsetto vocals projecting out, I sometimes think that he was reincarnated from one of those lonesome singing cowboys from the States. And the lyrics come off as a wrenching serenade to a loved one who just doesn't seem to respond (and the English translation of those words is conveniently written on the back of the CD cover). It's certainly one of the lushest love songs I've heard in J-Pop, and the arrangements remind me of the works of an American R&B singer who I have also adored over the years, Anita Baker The Quiet Storm.

The song peaked at No. 5 on the Oricon weeklies and ended up as the 60th-ranked tune for 1996. I think if a personal 90s playlist project were to be started, I'd be putting this on my Top 10 list. 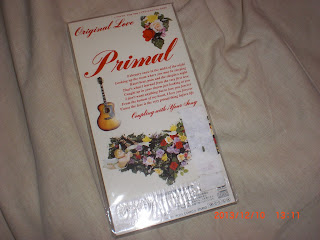 Email ThisBlogThis!Share to TwitterShare to FacebookShare to Pinterest
Labels: 1996, J-AOR, J-R and B, Original Love, Single