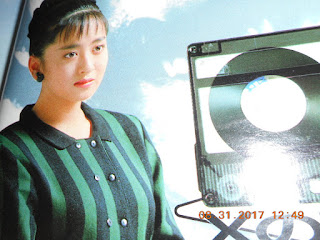 I wasn't intending on writing about her entire album tonight. Actually, I was just going to write about Yuki Saito's（斉藤由貴）"Finale no Kaze" since that was in my backlog, but then I realized that I hadn't even written about one of her trademark songs, "Shiroi Honoo"（白い炎）at all. Therefore, I gather that I will be giving myself the second Gibbs slap for today. It turns out that both songs come from her debut album "AXIA" which contains the title tune and another hit for her, "Sotsugyo"（卒業）.

Well, let's cover at least some of "AXIA" which was released in June 1985.


So, why don't we begin with "Shiroi Honoo" (White Flame), her 2nd single from May of that year, and compared to her innocent debut single, the aforementioned "Sotsugyo", "Shiroi Honoo" has more dramatic heft as the young lady in Yukinojo Mori's（森雪之丞）lyrics goes into despair mode about seeing the man that she's in love with dating another woman. Koji Tamaki（玉置浩二）of Anzen Chitai（安全地帯）composed the music which begins perhaps a bit off-tune for that sinister effect. Plus the other aspect that I think made "Shiroi Honoo" a standout was the refrain where Saito echoes the lady's self-flagellating questions about whether she's being a fool for wringing her hands for a guy.

The song was also the theme tune for the famous school action drama "Sukeban Deka"（スケバン刑事）when Saito had a starring role as Saki Asamiya. Some years ago, my good friend JTM wrote an extensive article on the show, so give that a look when you can. "Shiroi Honoo" reached No. 5 on Oricon.


Also on the B-side of "Shiroi Honoo" and on "AXIA" is "Shabon Iro no Natsu"（石鹼色の夏..Soap Bubble Summer）. It's also the flip side in terms of tone as creamy-voiced Saito wishes that she were a bubble so that she can get closer to her love target without him noticing since she's the shy type. I'd say that it's a pretty huggable number. Mori also provided the lyrics here but the composer for this one was Toshio Kamei（亀井登志夫）from the City Pop band NASA.


The one other song that I wanted to cover from "AXIA" and as mentioned above, the song that I was supposed to have covered on its lonesome is the track "Finale no Kaze"（フィナーレの風...Finale Wind）, another ballad about romantic tribulations. This one isn't quite as dramatic as "Shiroi Honoo" but it's got quite the jaunty beat and a nice bluesy sax to give it that urban contemporary feeling. Fuyuko Moroboshi（諸星冬子）and Shigeru Amano（天野滋）were responsible for words and music here.