Besides giving me my first karaoke experience, the karaoke bar in Sugamo had also allowed me to listen to songs I had otherwise not heard or found on my own accord. From the enka-loving trio or quartet of oldies, I got to take in decent attempts of "Hyotan Boogie" (瓢箪ブギ) and "Takeda Bushi" (武田節) - I'd be nuts to pick this work of Michiya Mihashi (三橋美智也). And from two middle-aged kayo fans, it was Naomi Chiaki's "Akai Hana" that caught my attention.

If I remember right, "Akai Hana" was either sung during the second or third round (since we arrived) by the prim-and-proper-looking lady. I was about two or three songs in but I still had yet to fully get over the jitters, plus the pressure of wanting to do good wasn't doing me any favours, so being greeted by the mellow music helped to loosen some knots in my stomach. As "Akai Hana" went on, it became clear to me that this was one tune I had to look into afterwards as I found myself enjoying it more than I thought I would, and it also became apparent that this grandma is one of - or - the best of the lot in terms of vocal prowess.

From what I had read from the J-Wiki a while after coming back to Singapore, "Akai Hana" was Chiaki's 34th and last single. It was released on 11th October 1991, almost a year before her husband, Eiji Go (郷鍈治), passed away, which makes the song rather poignant, as I will explain in a while. Composing the music was singer-songwriter, Masato Sugimoto (杉本真人...or すぎもとまさと when he's the "singer"), who had done a self-cover, and writing the lyrics was Fumiaki Matsubara (松原史明).

Looking at what Matsubara had written, it looks to me like the main character is reminiscing the times she once had with someone over a glass of sake, and she wishes to for things to be as they were, back to the happy times. Chiaki delivers the heroine's wistfulness very well, something I picked up when listening to the original and why I prefer it to the folkier rendition by Sugimoto. She starts off crooning in a mostly subdued manner, then further into the song, her husky delivery increases in intensity and becomes more pained. I liken this transition to when the character just begins to recall the events, after which she gets more bitter as she knows things ain't going to be as they were before, no matter how much she wills for it to be... I wonder if Chiaki might have become said character when Go was no longer around. 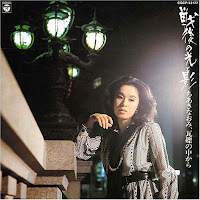 On a lighter note, I could also imagine Chiaki singing this at some smoky nightclub/music bar with Sugimoto in his cool guy shades on the acoustic guitar. Perched on a high stool, spotlight shining down on her, glass of brandy in hand, y'know, like Yujiro Ishihara (石原裕次郎). Speaking of Tough Guy, I would love to hear his boozy vocals lazily tackling "Akai Hana". Too bad it came out a few years too late.