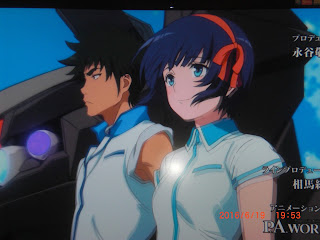 One anime this year that has gone the double-season route is "Kuromukuro" (クロムクロ...The Black Relic) which was produced by the company P.A.Works. Along with some of the more gentler anime that my buddy and I have been watching, this mecha anime set at Kurobe Dam, has been providing the action-packed side of things for the past several months in tandem with "Active Raid". It doesn't get more anime than giant robots dueling during the Tokugawa Era with a formerly-frozen-now-revived samurai driving the title robot with a reluctant high school girl who looks somewhat like the princess he was protecting hundreds of years ago.


I didn't warm to "Kuromukuro" immediately but as the first season progressed, I began becoming more invested in the characters and the story of the admittedly done-to-death alien invasion. One of the surprises for me was that GLAY took care of both of the opening theme songs. Of course, GLAY isn't the first rock band to provide anison but I think for a lot of fans and folks who weren't, this was indeed one of the biggest bands actually creating and performing an anime tune for the first time.

The first theme song "DEATHTOPIA" struck me as being pretty hardcore for an anime that takes place in the sylvan glades of Toyama Prefecture, but hey, it packs a punch as powerful as an attack by the Kuromukuro mecha itself. The above video has shortened versions of both it and the second opening theme song, "Chouonsoku Destiny". And I think the music video for "DEATHTOPIA" has got a good handle on what the title is all about.


Here is the first opening for "DEATHTOPIA" which was written and composed by guitarist HISASHI.

And this is the full version.


I actually like the second opening theme "Chouonsoku Destiny" (Supersonic Speed Destiny) better than the first GLAY foray into anime simply because the band here sounds like early Anzen Chitai（安全地帯）to me (and both bands do hail from Hokkaido). "Chouonsoku Destiny" was also created by HISASHI and is the second song on the "DEATHTOPIA" disc which was released last month in August as the band's 54th single. Not only has the song been the opener for this anime for the past several weeks, but it was also the ending theme to an Internet news program, AbemaPrime.


Here is the original recorded full version for "Chouonsoku Destiny". "DEATHTOPIA", by the way, peaked at No. 6 on the Oricon weeklies. The show is just about to reach the climax with a few more weeks left so I'm anticipating that "Kuromukuro" will end with a huge bang....hopefully with Kurobe Dam intact.
Posted by J-Canuck at 10:08 PM