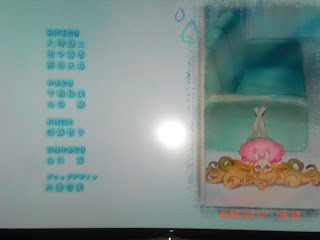 Another anime season is wrapping up. I met up with my anime buddy for another all-day session yesterday in which we saw the finales for some of the mellower entries of the summer such as "Amanchu!" (truly the most laid-back anime I've seen in nearly 5 years), "Kono Bijutsu-bu ni wa Mondai ga aru!", and this one "Amaama to Inazuma"（甘々と稲妻...Sweetness & Lightning）about the Inuzuka family and their increasing interest in cooking.


I've already written about the opening and ending themes but I felt rather compelled due to the earworm burrowing through my head to also talk about one other song from "Amaama to Inazuma" that isn't an official theme and only had several seconds of airtime in Episode 7 when cute little 5-year-old Tsumugi decided to go out on her own (without Dad's permission) shopping trip. Tsumugi, as played by 10-year-old child actress Rina Endo（遠藤璃菜）, sang this little tune which I will dub "The Shark Song" that was probably taught to her by her father or late mother so that she would stick to a straight line while walking on the street away from traffic (stay on the straight line or be eaten by the land sharks!).

Not sure who came up with the earworm although I suspect that it is the music producer for the show, composer Nobuko Toda（戸田信子）. I found out that she was also responsible for the music for the "Metal Gear" games. In any case, "The Shark Song" is so cute that even a pack of Great Whites would go into a squeeing frenzy.


Heck, even Godzilla got into the act! It's too bad, though, that the exact scene from Episode 7 was taken out.


"Amaama to Inazuma" was truly a slice-of-life anime. In fact, it finished its run (and I don't think there will be a sequel) so quietly and without any sort of hard conclusion that I thought there would be one more episode. Instead, we all just left them enjoying their okonomiyaki dinner, although the above video has Tsumugi enjoying hamburg steak.
Posted by J-Canuck at 1:53 PM