Ahhhh....Miyuki Imori（井森美幸）. She has been one of the chatty and cheerful tarento mainstays on Japanese TV for years and years. Of course, she's also appeared on tons of commercials and I remember her especially for her work for Mondamin Mouthwash. Incidentally, she hails from the prefecture where I had resided over a quarter-century ago, Gunma Prefecture, although she was born (1968) and raised in the southwestern part of the province while I was assigned up north in the Japanese Alps. Apparently her hometown of Shimonita is famous for its green onions.


If she has a best friend on TV, it would be former aidoru Ikue Sakakibara（榊原郁恵）since I always saw them together in some cooking segment on one of the morning wide shows, and I believe they were fellow panelists on the monomane specials.

In 1984, she entered the 9th Annual Horipro Tarento Scout Caravan by Hori Productions, one of the big talent agencies, and won the Grand Prix over 120,000 other hopefuls including actress Honami Suzuki（鈴木保奈美）of "Tokyo Love Story".


Then in April 1985, Imori made her official debut as an aidoru with "Hitomi no Chikai" which has been translated as "Promise On Your Eyes" in the music video above and as "Swear By My Eye" in the Wiki article for the lass. Although written and composed by the big duo of Chinfa Kan and Tetsuji Hayashi（康珍化・林哲司）, it is pretty much a run-of-the-mill aidoru tune that isn't horrible but will probably disappear from my memories within several minutes (mind you, they were responsible for a big hit for another singer). Then again, the vast majority of songs ever sung by the huge throng of 80s aidoru would be classified similarly. Still, "Hitomi no Chikai" did OK on the charts, peaking at No. 32, and winning her the Excellent Newcomer Emerald Award at the Megalopolis Song Festival. She released another 5 singles up to 1989 along with one original album and two BEST compilations many years later.

Here is Imori performing her debut song on an episode of "Utaban" (うたばん) with hosts Takaaki Ishibashi and Nakai-kun looking humourously bemused. I'm surprised that the former fellow didn't just attack her as he usually would. Looking at her swaying and bouncing around like that, I think that seemed to have been the default "choreography" for an 80s aidoru since I've seen many a teenybopper girl from the earlier years do those movements.


And speaking about "choreography" (I'm retaining my quotation mark rights for a reason here), Imori is also notorious for a dance number she did in her audition at that Horipro Tarento Scout Caravan in 1984. It has apparently gained legendary status and like those annoying parents who pull out the video or photographs of their daughter (much to her horror) doing something embarrassing in her early years, Imori's fellow tarento like to pull out that footage occasionally to get her screaming and to educate/remind viewers. I've seen the audition many times now on TV and she kinda looks like Barney the Dinosaur on Red Bull.


However, showing that she's a good sport with a sense of humour, she didn't resist too much at being dragged onto the floor and performing that very same dance years later. 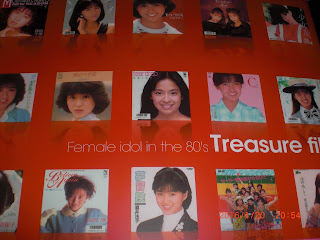 With her debut in 1985, her contemporaries are Minako Honda（本田美奈子）, Miho Nakayama（中山美穂）, Yui Asaka（浅香唯）, Yuki Saito（斉藤由貴）, Yoko Minamino（南野陽子） and the Onyanko Club（おニャン子クラブ）among others. And according to her profile on the Horipro website, one of her talents is ripping magazines. Well, I gather after being razzed about her dance video all these decades, she has probably gotten quite good at it.
Posted by J-Canuck at 8:46 PM